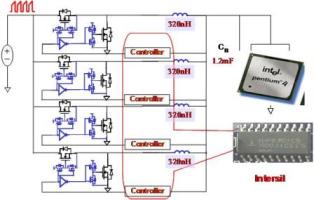 The proposed multi-phase converter appeared to be considerably more complicated than the current practice simply because it used multiple converters of the same like instead of one single converter circuit. However, significant advantages were demonstrated in the prototype and industry quickly adopted this approach and had first integrated the full controller into one IC chip that would considerably simplify the control aspect of it and by doing that, one can see that there is no increase in cost in terms of silicon in power devices nor is it in controllers, and that there is a reduction of inductors and capacitors. So, after that, industry was convinced that it not only provided superior performance advantage, but was also a cost effective solution.
Return to CPES Showcase