Funding from government and industry sources for five new research projects was received by Christina DiMarino, Yuhao Zhang, Igor Cvetkovic, and Bo Wen. The projects are described below.

Sponsor: U.S. Department of Energy through PowerAmerica
PI: Christina DiMarino - January 1, 2021
The increase of complex systems with dynamic non-linear loads, such as machines with variable speed drives and military systems with widely-varying load profiles, has created a demand for active three-phase rectifiers to reduce power loss and thermal stress in power distribution and generation equipment. This work proposes to integrate 1.2 kV SiC MOSFETs with drivers, decoupling capacitors, and PCB-winding inductors to build a 7 - 10 kW integrated power module building block (IMBB). The IMBB can be flexibly arranged to form different power converter systems, such as dc - dc converters, and single- and three-phase rectifiers/inverters. Advanced packaging design will be used to minimize the parasitic inductance of the power and driving loops, enabling operating switching frequencies of 600 kHz - 1 MHz. With interleaving control, the equivalent switching frequency at the input terminal will be 1.2 - 2 MHz. This high switching frequency shrinks the size of the magnetics, thereby increasing the power density. State-of-the-art heat spreading materials and cooling techniques will be used to effectively dissipate the heat from the SiC MOSFETs. Infineon will provide SiC MOSFETs, gate driver components, and engineering support to recommend best practices during the IMBB design stage, Virginia Tech will design and prototype the IMBB, and Lockheed Martin will demonstrate the IMBB. The proposed IMBB will be tested at the target load range of 7 - 10 kW. 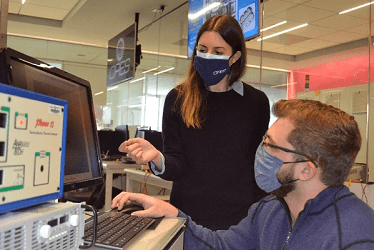 Sponsor: Office of Naval Research
PI: Igor Cvetkovic - January 1, 2021
CPES will continue supporting (Office of Naval Research (ONR)'s mission by participating as a member of the Electric Ship Research and Development Consortium (ESRDC), a multi-university consortium led by Florida State University. Within this framework, CPES is working on the demonstration of PE BB 1000 (power electronics building block) based power converters and systems, for which it has developed an updated version of the PEBB 1000 unit built with 1.7 kV SiC MOSFET devices. It will continue working on the impedance measurement unit (IMU) previously developed for ONR using 10 kV SiC MOSFET devices and a multi- megawatt converter capable of operating from 4,160 V ac and 6,000 V dc networks, to measure the terminal impedances at interfaces of interest, with the purpose of assessing the stability conditions of the electrical system. The focus of this work will be to improve its electromagnetic compatibility (EMC), necessary to operate with the fast-switching 10 kV devices in place. Lastly, CPES will support the electric ship design, modeling, and simulation effort within ESRDC by integrating the modeling of power electronics systems, taking into consideration parametric and model-form uncertainties during the process, with which improved and optimum designs will become feasible using the PEBB models developed. 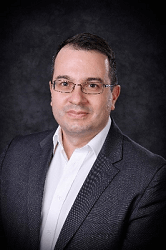 Power Electronics Based Self-Monitoring and Diagnosing of Photovoltaic Systems

Sponsor: U.S. Department of Energy
PI: Bo Wen - March 1, 2021
This project proposes to develop a self-monitoring and diagnosing technology for photovoltaic (PV) plants based on their own existent power electronics. The power electronics in a PV system, such as power optimizers and inverters, will be enabled to actively perturb the system, measuring its response and estimating the dynamic impedance of its components in order to monitor their parameters and detect any changes to continuously assess their health and reliability. The proposed technology will be demonstrated on a 10 kW PV system already in the Virginia Tech laboratory that is comprised of a PV panel emulator, power optimizers, and a 10 kW inverter prototype. An offline impedance analyzer will be used for the validation of the online measurement. A thermal chamber will be used to age components such as capacitors. 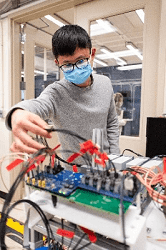 Sponsor: Office of Naval Research
PI: Yuhao Zhang - March 15, 2021
Low-cost, efficient, fast, and reliable power devices that work at high-frequencies and high-voltage levels are central to improving the efficiency of electrical energy processing. Medium-voltage power devices (1 kV-35 kV) are widely used in applications such as electric ships, power plants, electrical grid, industrial motor drives, etc. Today's medium-voltage power devices are mainly made of silicon (Si) and silicon carbide (SiC), while gallium nitride (GaN)-based devices are widely perceived as excellent candidates for the next generation of high-frequency medium-voltage applications, owing to the superior physical properties of GaN compared to Si and SiC.
In this five-year project, Virginia Tech (VT), working with Qorvo, will pursue coordinated efforts to realize the medium-voltage vertical GaN superjunction technologies. This will initially focus on the demonstration of 1.2-1.7 kV prototypes, then scaling to 3.3-10 kV. This team will also participate in the GaN Superjunction working group established by the U.S. Naval Research Laboratory (NRL). This work, if successful, will significantly extend the application space of GaN devices, enable an unprecedented level of miniaturization and integration of medium-voltage power electronics, lower the energy loss in power applications, and foster the increased adoption of power electronics in naval shipboard power systems. 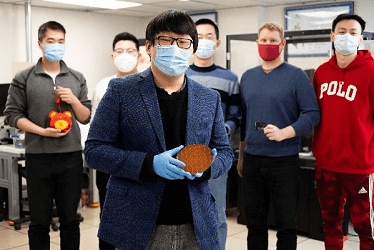 Sponsor: Huntington Ingalls Incorporated
PI: Igor Cvetkovic - April 13, 2021
The scope of this project is to develop a high-fidelity model of a three-phase electric machine, preferably a Permanent-Magnet (PM) machine, for use in a real-time hardware-in-the-loop environment. The choice of a proper HIL real time processor (OPAL-RT, Speedgoat, Typhoon, RTDS, PLECS, or other), as well as the choice of a Power HIL (P-HIL) platform (EGSTON COMPISO, Regatron, or other) that will be used throughout the project lifetime, will be made within the first three months of the project. The selection will be made jointly with NNS engineers after careful consideration of advantages and disadvantages of each platform. The same holds for the selection of a proper PM machine that will be used for experimental demonstration and model validation. The machine will need to have a torque meter and a speed meter (encoder or resolver) on its shaft in order to allow detailed, terminal characterization for behavioral modeling, as well as enable a small-signal stability study. Proper mechanical load (water brake dyno, or another electrical machine) has to be selected too.
The CPES project team will alternatively consider use of one of CPES-developed three-phase converter prototypes to serve as a motor-drive. Specifically, under development is a 100 kW SiC-based AC-AC modular bidirectional power converter which is funded by one of CPES' current Department of Energy (DOE) Advanced Manufacturing Office (AMO) programs. The prototype will be finalized in the summer of 2021 and could potentially serve as a PM machine motor-drive and/or as a perturbation injection unit for machine-related stability studies. If this prototype is not available, the selected P-HIL will be used for the same purpose, thus minimizing any risk to compromise completion of this project. 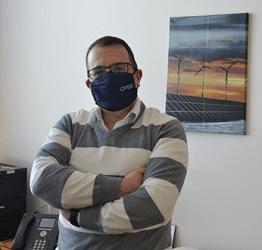