Fig. 1. Topology of the whole system.
High power density is one of the key topics for the continual development of power electronics converters. Power converters are designed not only to meet the input and output requirements, but also to achieve a low volume or a light weight in many specific applications such as information technology, hybrid vehicles and aircraft. The increase of power density is mainly achieved by increasing the switching frequency, enabled by faster and lower-loss devices. Recent research shows that further improvement is expected in the near future with the implementation of SiC devices, since they offer the features of fast switching, low loss and the ability to function at high operation temperatures.

A 10 kW high-density three-phase ac-dc-ac converter using SiC JFETs and SiC Schottky diodes is developed in CPES in 2008. The system topology is shown in Fig. 1. The Vienna-type rectifier is implemented as the active front end, and a standard two-level voltage source converter is used to realize the dc/ac transformation. This topology is selected since it can potentially lead to a higher density design. Because of SiC devices used for this converter, the switching frequency is much higher than normal converter in this power rating range, which is 70kHz for front end and 40kHz for inverter side. Thus, the weight of the passive components is reduced significantly without much penalty on heat sink design. Finally, the power density of the converter system is pushed close to 2kW/lb without considering housing and controller. 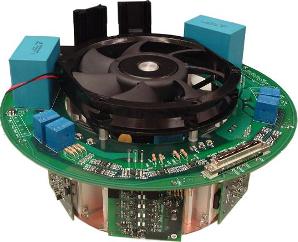 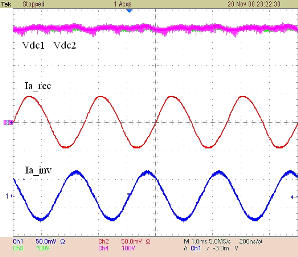