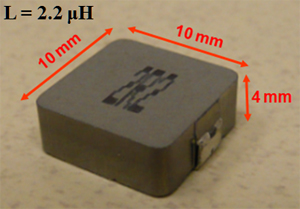 The constant-flux inductor introduced herein has the windings configured to distribute the magnetic flux uniformly throughout the magnetic volume to obtain a higher energy density and a smaller package volume. A relatively constant flux distribution is advantageous not only from the density standpoint, but also from the thermal standpoint via the reduction of hot spots, and from the reliability standpoint via the suppression of flux crowding. Therefore, the volume of the inductor can be reduced significantly, whereas the inductance and dc resistance remains the same. 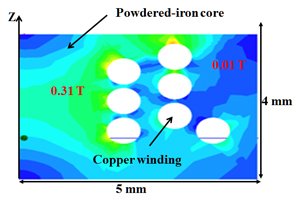 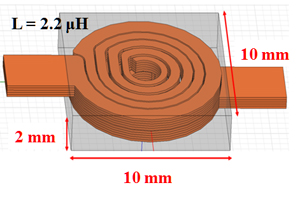 Fig. 3. 3D structure of a constant-flux inductor; total thickness is reduced by half to 2 mm, whereas inductance is kept at the same 2.2 µH.

Fig. 4. Relatively uniform distribution of flux density in the core of the constant-flux inductor. 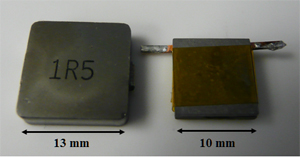