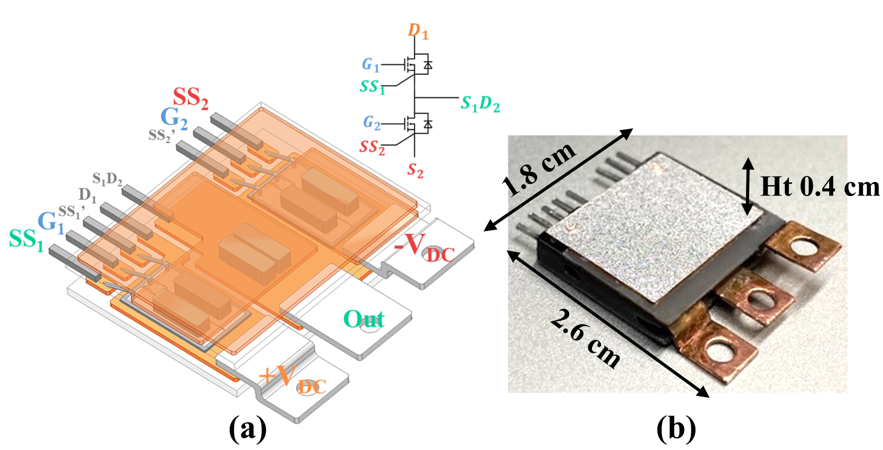 Fig. 1. (a) Layout design of the 1.2 kV, 149 A SiC MOSFET double-side cooled half-bridge module, and (b) the as-fabricated module.
Planar, double-side cooled power modules are emerging in electric-drive inverters because of their low profile, better heat extraction, and lower package parasitic inductances. In a double-side cooled module, interposers are necessary for device top-side interconnections for routing and heat dissipation. The most commonly used material for interposers is solid copper (Cu). However, due to the high elastic modulus of copper and the coefficient of thermal expansion (CTE) mismatch between the copper and semiconductor materials, thermo-mechanical stresses are introduced under temperature cycling conditions, thus leading to a concern about the reliability of the double-side cooled modules. Molybdenum (Mo) has been proposed as an alternative solution to Cu thanks to a less CTE mismatch. However, Mo also has high elastic modulus and requires additional coatings to be compatible with soldering or sintering.
In this work, a porous interposer made of low-temperature sintered-silver (Ag) is introduced to reduce the thermo-mechanical stresses in the module. A double-side cooled half-bridge module consisting of two 1200 V, 149 A SiC MOSFETs shown in Fig. 1 was designed, fabricated, and characterized. The appearance and microstructure of sintered-Ag interposers are shown in Fig. 2. By using the sintered-Ag instead of solid Cu interposers, our simulation results showed that at a total power loss of 200 W, the thermo-mechanical stress at the most vulnerable interfaces (interposer-attach layer) was reduced by 42% and in the SiC MOSFET by 50% with a trade-off of only 3.6% increase in junction temperature. The sintered-Ag interposers were readily fabricated into desired dimensions without post- machining and did not require any surface finishing for die- bonding and substrate interconnection by silver sintering. The porous interposers were also deformable under a low force or pressure, which helped to accommodate chip thickness and/or substrate-to-substrate gap variations in the planar module structure, thus simplifying module fabrication. Experimental results on the electrical performance of the fabricated SiC modules validated the fabrication of a module design that employs the sintered- Ag interposers and all sintered-Ag joints for making high power-density converters with reliable operations at high junction temperatures.

Fig. 2. (a) Sintered-Ag bar, (b) a few pieces of the cut interposers, and (c) a scanning electron microscope image showing the porous microstructure of sintered-Ag interposer.