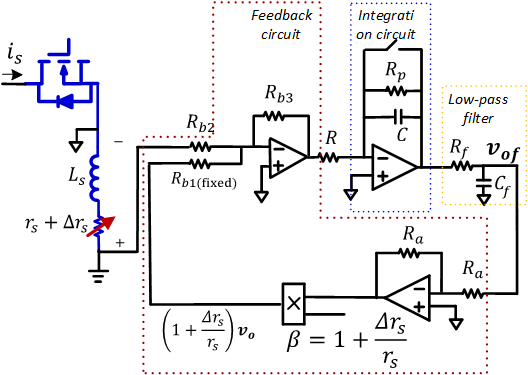 Fig. 1. Proposed current sensor scheme
Since the SiC MOSFET is designed with small size, the thermal mass is much smaller compared to Si-based MOSFET. Under the short-circuit condition, the temperature rise in the SiC MOSFET is much faster, which leads to the damage of the power modules. Therefore, it is crucial to have a fast current sensing to trigger the protection under the short-circuit fault. There have been several simple current sensor schemes, which are based on the stray inductance of the power module. These methods eliminate the need to use the Rogowski coil, which consumes a large space of the PCB circuit. However, due to the inaccuracy under temperature variation, the function of these current sensors is mostly limited to protection.

The proposed current sensor scheme, which includes an integration circuit, a low-pass filter, and a dynamic feedback loop, is presented in Fig. 1. Based on the sensing current waveform, the change in the wire bond resistance between the Kelvin source and power source terminals is calculated. Then, the correction factor, denoted by β, is continuously updated to the feedback loop in Fig. 1 to mitigate the error in the current sensors output caused by the temperature variation. Fig. 2 presents the switching current waveform with the proposed current sensor versus that measured by a commercial Rogowski coil probe, under a DPT test. It is a good agreement between the two characteristics in the on-time interval of the switching device, including the short transient time shown in the magnified area. This indicates that the measurement current with the proposed sensor can be used for both protection and control purposes. 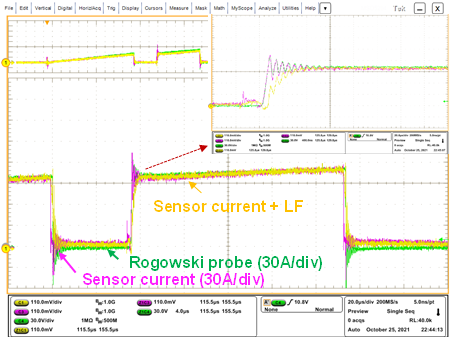 Fig. 2. Sensing current waveform with the proposed sensor and the Rogowski coil at steady state
,