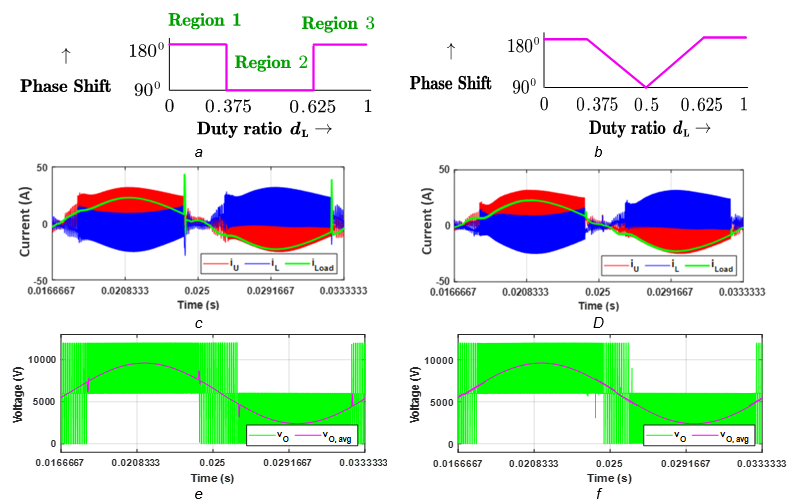 Fig 1. Two modules per arm MMC setup
Modular Multilevel Converters (MMC) have gained a lot of traction in the recent years due to their scalability and modularity. While extensively utilized for high voltage applica-tions, the MMCs have a major challenge in terms of the submodule capacitor sizing. This stems from their reliance on line frequency operation and hence restricts their utilization in power dense operating situations like wind energy generation or ships.

Switching Cycle Control (SCC) has been proposed earlier which transforms the line frequency operation of MMCs to switching frequency operation, greatly improving the power density of converter. To implement SCC, the converter must pass through several operating re-gions with different phase shift (PS). This change in PS is necessary to maintain converter regu-lation, but this change can also introduced unwanted transients. To demonstrate, the idea, con-sider a two module per arm MMC as shown in Fig. 1. The two operating modes shown in Fig. 2a and 2b. Conventionally the transition has been abrupt as in Fig. 2a. This can lead to transients at transition points as visible in Fig. 2c and Fig. 2e. This work on the contrary, proposes a variable PS method where the PS between modules of the same arm vary continuously as shown in Fig. 2b. As observed from Fig. 2d and Fig. 2f, the transient behavior can be eliminated using the proposed method. 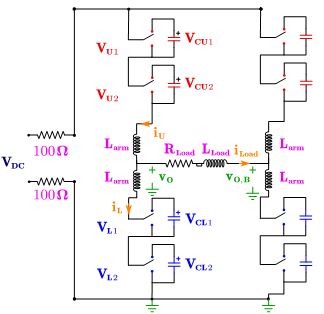