Fig. 1. Resonant converter and its dc equivalent circuit.
Distributed power systems in IT equipments normally have a front-end dc-dc converter in cascade with point-of-load converters (POLs) to power load subsystems. The output from the front-end dc-dc converter does not have to be fully regulated since the load voltage regulations are done by POLs. A traditional front-end converter can be replaced by a dc-dc transformer (DCX) or a semi-regulated converter, which has simpler structure than a regulated converter. Current sharing (CS) feature in DCX is necessary to realize scalable distributed power systems.

The droop CS method is commonly used in DCX because of no communication bus required between the paralleled modules. This technique relies on the slope of the output regulation characteristic. CS error, the current difference between the paralleled modules, is proportional to output voltage set point error and is inversely proportional to the droop voltage. To achieve acceptable CS error of 10%, the droop voltage should be 5% of the nominal output voltage.

In traditional DCX based on open-loop resonant converter or PWM half-bridge converter, the droop voltage depends on the resistive voltage drops in the power stage, which is too small to for droop CS method. To get the required droop voltage for a specific CS error often leads to higher conduction loss.

Resonant converters have a nature characteristic that the conversion gain M depends on the load current. The resonant tank behaves like a virtual droop resistance as shown in Fig.1. The droop voltage can be obtained without incurring conduction loss. One of the well-known resonant converters suitable for DCX implementation is an LLC resonant converter. However, the operating point of the LLC circuit to get the desired droop voltage is much higher than the resonant frequency, which entails the low efficiency.

A notch filter, Lp and Cp, is introduced into the LLC resonant tank. The conversion gain M becomes more sensitive to the frequency as shown in Fig. 2. The Thus the desired droop voltage is achievable at lower frequency, which means the higher efficiency. 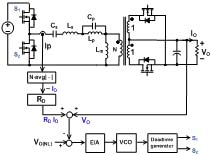