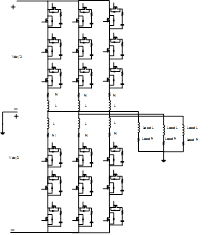 Fig. 1. (a) 3-module per arm MMC.
Modular multilevel converters are a new topology that has gained high interest from amongst the other multilevel converters. The reasons for this interest are the modular structure and the high-quality output voltage and current, which does not require an output filter. One of the main disadvantage of the MMC is the high second harmonic circulating current, which causes a high-voltage ripple over the capacitor of each module.

In Fig. 1 A and B, the modular multilevel converter is shown along with each module for each of its three arms, respectively. The DC-link capacitor for the power converters can be described using equations (1), (2) and (3), in which VCPerArm is the voltage of the capacitors per arm, CPerArmMin is minimum total capacitor value of the arm, and tVmaxis the time interval of the voltage ripple.

The reliability equation of the each design example in each cases are obtained and shown in Fig. 3. The failure rate of each capacitor is calculated based on the datasheets, which are provided by the manufacturer.

Fig. 2. (a) Simulation for each of the three cases. 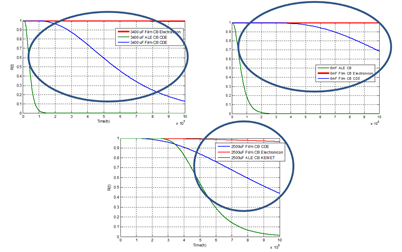