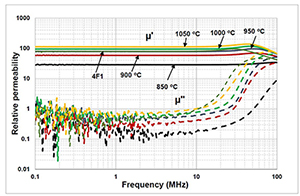 Fig. 1. Complex permeability dispersion spectra of the sintered LSF 50 toroid cores and the NiZn ferrite (4F1) core
In an effort to find a magnetic material for making low-loss magnetic components for high power-density converters, we investigated the effect of sintering temperature of a commercial NiCuZn ferrite powder doped with Bi2O3 on the magnetic core-loss characteristics, both the complex permeability and core-loss density at high magnetic flux density and 5 MHz. For comparison, we characterized a custom-made NiZn ferrite (4F1) toroid core from Elna Magnetics (Saugerties, NY), which had the same dimensions as our sintered toroid cores with sintering temperature higher than 850°C.

A commercial NiCuZn ferrite powder doped with Bi2O3 was used to study the effect of sintering temperature on their magnetic properties, both the complex permeability and core-loss density, for applications in high-frequency power converters. The ferrite powder was sintered into toroid cores at 850, 900, 950, 1000 and 1050°C for two hours. We found that the sintering condition at 850°C for two hours was not sufficient to densify the powder, resulting in low relative permeability and high core-loss density. All the other sintered cores had relative permeabilities in the range of 60 to 115, which followed the trend of higher permeability with increasing temperature. The core-loss densities measured at 5 MHz and several to over 10 mT of B-field strength were the lowest from the cores sintered at 950°C and 1000°C. Comparing with the core-loss density of a commercial NiZn ferrite (4F1) toroid core, the loss densities of all of the sintered LSF 50 cores, except the one sintered at 850°C, were 2 to 3 times lower than that of the NiZn core. We believe that a combination of high density, large grain size, and high electrical resistivity of the sintered LSF 50 core contributed to lowering the eddy current loss and hysteresis loss under the 5 MHz alternating magnetic field excitation. 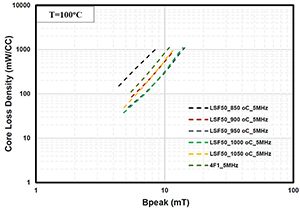