Fig. 1 Mechanical Diagram of WEC system including: Buoy, MMR, Mechanical Coupling, Generator, and Power Converter.
An equivalent circuit provides a faster and reliable way to analyze and design the wave energy converters (WECs). A WEC as a mechanical - electrical composite system which converts ocean wave energy to electrical power is shown in Fig. 1. The WEC system starts from buoy-wave interaction coupling with a rotational mechanical system, and then a mechanical motion rectifier (MMR) drives the permanent magnet synchronous generator (PMSG) which delivers energy to a power electronics converter.

Through approximation and circuit synthesis methods, wave-buoy behavior can be linearized as a RLC circuit network in Fig 2. The nonlinearity of MMR sets can be modeled as transformers and diodes. Along with a generator circuit model and power converter, a general methodology is shown to convert a multidisciplinary system into electrical components, which can be an aid to the electrical designers in the wave energy area.

Two applications will be introduced in this work. One is to apply a reliability analysis of each component. Under irregular wave conditions, a wave force is modeled as a current source that defines the input of the system in Fig. 2. Each rotational speed and torque values can be monitored real-time as voltage and current waveforms, so the maximum stress of each component can be recorded. Another is applied to optimize the systems output power. Based on an equivalent circuit, the system's output power capability can, thus be analyzed under different wave periods and gear ratio in Fig. 3.

Fig. 2 Equivalent circuit of the WEC and its output waveforms under irregular wave condition. 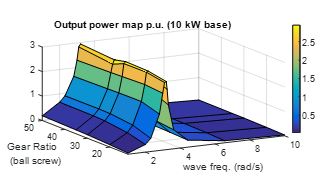