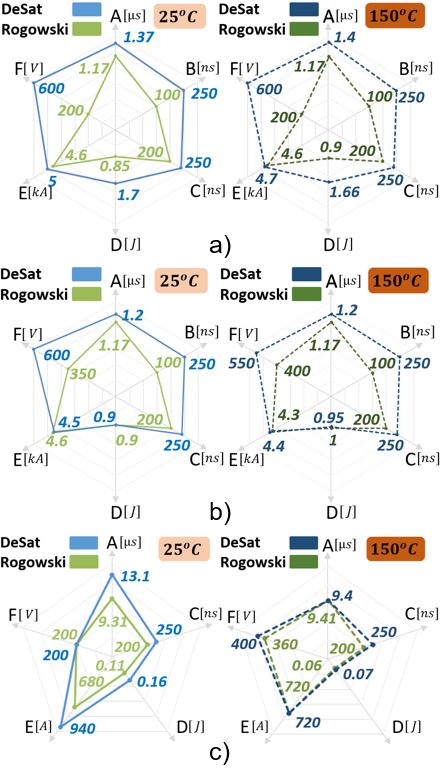 Fig. 1. Comparison between desaturation protection and Rogowski coil current sensing protection for (a) FUL, (b) HSF and (c) load fault.
The silicon-carbide (SiC) metal-oxide semiconductor field-effect transistor (MOSFET) as a wide bandgap (WBG) device boasts a superior performance for its high breakdown electric field, high working temperature, fast switching speed, and low on-state resistance. However, when an overcurrent (OC) or short circuit (SC) occurs, SiC MOSFETs can only withstand these severe conditions several μs, which indicates in some cases lower robustness than the Si IGBT counterpart. The gate drive circuit must be able to detect the fault condition and safely shut the device off before a failure occurs. Since the SiC MOSFET power module package has a low internal inductance and the device has low on state resistance, fast SC di/dt will make the current quickly rise to a high level, causing possible destruction of the module from excessive dissipated energy or high overshoot during the turn-off. Therefore, response time is critical for the SC protection of SiC MOSFETs due to the limited SC withstand time. Robust SC protection with fast detection and reaction combined with turn-off in a safe manner is absolute necessity.

According to the behavior of the device during the SC and the previously stated, two protection methods will be compared in: A. Time spent in SC [µs], B. Detection time (time from beginning to the detection) [ns], C. Reaction time (time from the detection until soft turn-off (STO) is initiated) [ns], D. Energy dissipated on devices during SC [J], E. Current peak [kA] and F. Voltage overshoot (max measured overshoot) [V]. Protections will be compared in fault under load (FUL), hard switching fault (HSF), and load fault types of fault.

Both protection methods are successful in protecting the module from destruction no matter the SC type. However, it can be observed (Fig. 1.) that DeSat performance can depend on the SC type and temperature (load fault). DeSat protection performance in the FUL and HSF cases of SC is are adequate. It is slower than Rogowski coil-based protection, which results in a higher peak current and higher dissipated energy, especially in the FUL case, as well as a higher overshoot. DeSat in load fault type is highly dependent on the temperature, which returns better performance of DeSat at higher temperatures because protection is tuned in that manner. The Rogowski coil-based protection method demonstrates consistent behavior and performance regardless of the temperature of the module or the SC type. This behavior is a consequence of protection based on current measurement, not measuring the VDS voltage, which is highly dependent on temperature since the on-state resistance relies on temperature.