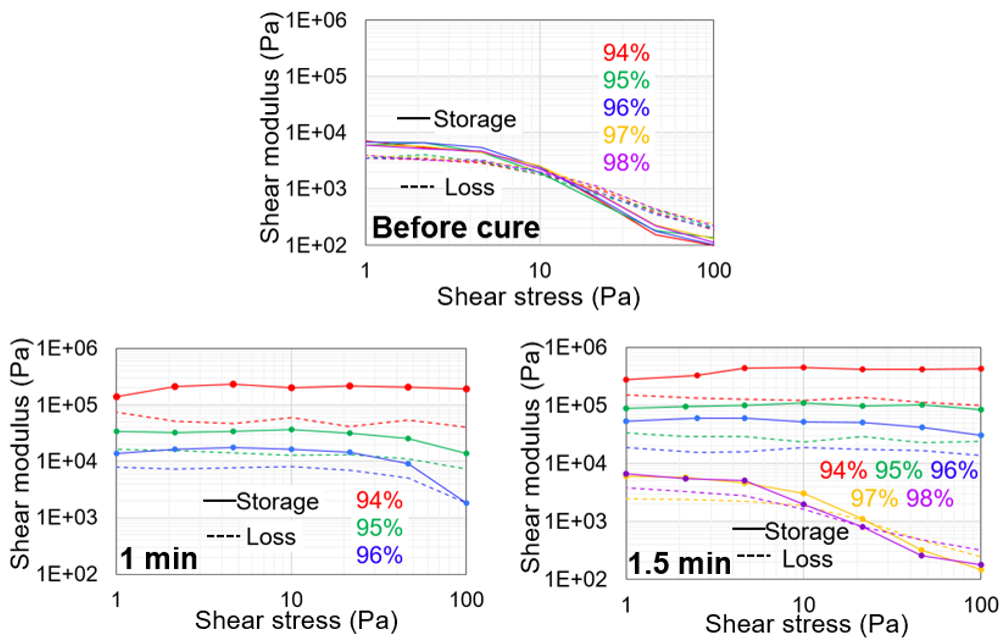 Fig. 1. Complex shear moduli versus shear stress of as-prepared pastes, pastes after 1 min UV illumination, and pastes after 1.5 min UV illumination
Magnetic components are necessary elements in power electronics converters for storing and converting energies, but they are often the bulkiest. Novel structures of magnetic components can be designed, but making them is difficult when using current available materials and fabrication processes. Additive manufacturing (AM) has the potential to instigate a paradigm shift in how power magnetics are designed and made. Among the many 3D-printing platforms, the direct-extrusion type can print multiple materials into a single structure. This capability enables one-step shaping of a whole magnetic component, i.e., core, winding, and/or die-lectric insulation, together. However, it was recently reported that magnetic paste feedstock for extrusion-based AM suffered from the slumping problem; thus, not suitable for building tall core structures. In this study, a NiZn ferrite paste feedstock is formulated that develops deformation resistance under UV illumination. Deformation resistance of an ink or paste feedstock is usually characterized by its complex shear modulus, both the storage and loss modulus, as a function of shear stress. For a paste feedstock to resist deformation after deposition (or called solidified), it usually has a storage modulus higher than 3 * 104 Pa, and a yield stress (crossover between the storage and loss moduli) higher than 60 Pa. Shown in Fig. 1 are the modulus plots of the UV-cured pastes with different solid loadings after 1 min and 1.5 min UV curing time, respectively. 94 % and 95 % pastes solidified after only 1 min illumination; 95 % had to be illuminated for 1.5 min; 97 % and 98 % pastes may need > 1.5 min illumination to solidify. To demonstrate the feasibility of 3D-printing of tall core structures using UV-curable ferrite paste, 6 mm-tall toroid cores and 5 mm-tall E cores were made using the UV-assisted 3D printer. Shown in Fig. 2(a) to Fig. 2(d) are the as-printed parts. The structures shown in Fig. 2(a) and Fig. 2(b) were made without UV exposure. As expected, the parts slumped and kept slumping with time. The structures in Fig. 2(c) and Fig. 2(d) were made with UV exposure for 1.5 min and 1 min, respectively. After the UV-cured structures were formed in the printer, they were heated to 1000 ? to remove all organic compounds and sinter. The sintered toroid core (Fig. 2(e)) and E core (Fig. 2(f)) had no cracks or warpage. The pictured cores were as-sintered without any polish. 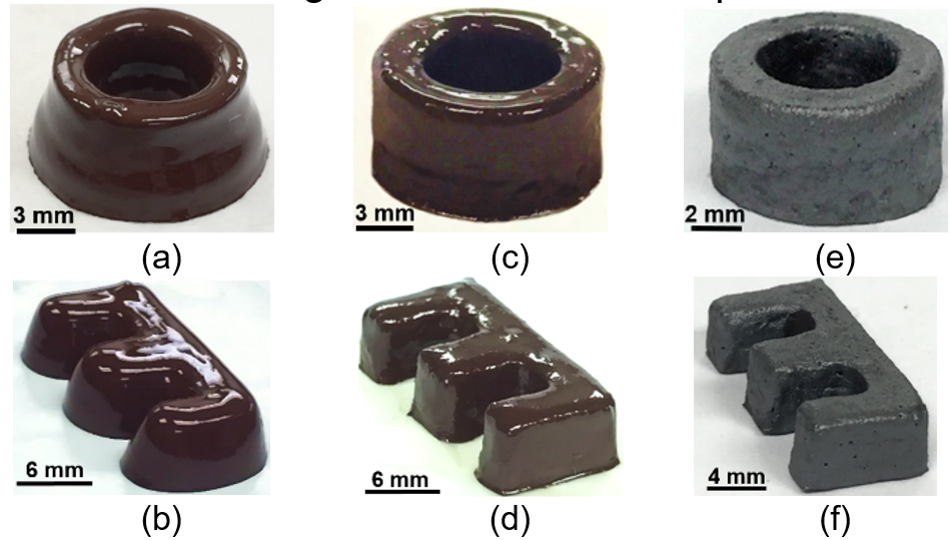