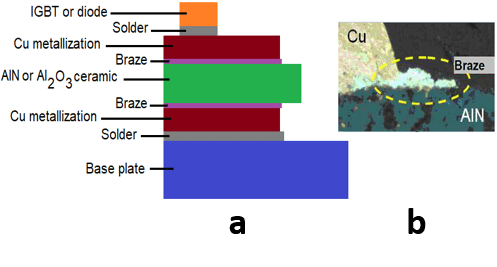 Fig. 1. Schematic of an IGBT substrate.
&nbspWide bandgap (WBG) power modules made from materials such as SiC and GaN (and soon Ga2O3 and diamond), which can tolerate higher voltages and currents than Si-based modules, are the most promising solution for reducing the size and weight of power electronics systems. In addition to the higher block- ing voltages of WBG power modules, their volume has been targeted to be several times smaller than Si-based modules. This translates into higher electric stress within the module and, in turn, a higher risk for unacceptable partial discharge (PD) activities, leading to aging and degradation of both the ceramic substrate and the silicone gel. Under sufficiently high electric stress, PD occurs at the weak points, including air bubbles in the silicone gel and pores existing in sintered ceramic materials. Also, sharp metallization edges have been recognized as the locations leading to electric field enhancement and initiation of the PD in the gel. Electric stress enhancement can even reach to a higher value at the protrusion resulting from brazing of the metal on the substrate, as shown in Fig. 1(b). Thus, reducing PD activity to a permissible level recommended in standards is the main task in designing the HV modules due to the detrimental effect of PD on electrical insulation aging and eventual breakdown of the whole system. In this work, through electric field modeling and simulations carried out in COMSOL Multiphysics, it has been shown that combining geometrical techniques and applying nonlinear field depen- dant conductivity (FDC) coating to highly stressed regions can lead to a significant electric field reduction in both silicone gel and ceram- ic substrate under both ac and dc voltages. However, due to the flow of the displacement current under ac voltage, the advantage of using nonlinear FDC materials reduces compared to the dc case. The influ- ence of different switching values of FDC materials on the field grad- ing is also investigated. According to the results, the FDC coating layers with higher switching fields are leading to better field grading. Furthermore, it has been shown that although a non-bridging, non- linear FDC coating layer can address high electric field issues around the upper metallization layer, it leads to electric field enhancement at the triple point of the bottom metallization layer. Bridging the FDC coating layer can address this issue. Fig. 2(a) and 2(b) show the 2D electric field distribution for the base case and bridging case, respectively, where a remarkable electric field reduction can be seen by applying the bridging nonlinear FDC coating layer.

Fig. 2. Electric field distribution for (a) base case without FDC layer and (b) bridging FDC layer.