Fig. 1. Power and temperature fluctuation under nominal wave condition Hs = 1.25 m, Te = 6.5 s, Zin = 7.5 Ω. Output power of the power converter Po, and the junction temperature of the IGBT module Tj1-d1 are shown.
Compared to other renewable energy technology, the wave energy converter (WEC) is still in the pre-commercialization stage due to its high levelized cost of energy (LCOE). Researchers in wave energy harvesting have tried to increase power-on-power converters through various optimal control algorithms, including maximum power point tracking (MPPT), optimal passive damping, and intermediate control with power limitation. Whereas only harvestable power has been considered in these optimal control algorithms, the lifetime of the power converter is a critical factor. Especially with higher peak-average power compared to other re- newable energy converters, higher thermal fluctuation is expected to reduce the lifetime of the power module, as shown in Fig. 1.
It is necessary to develop a control algorithm for power converters to reduce the damage from thermal cycles and produce more energy. Fig. 2 shows the damping selection strategy to maximize the energy over different wave conditions. The annual wave control profile is then selected based on the map in Fig. 2 for maximum power and maximum energy strategy for each wave condition. Energy and power over certain wave conditions is weighted based on its possibility over the course of a year, which sums up as the average power. Total recoverable energy is derived from the energy of each irregular wave condition over the period Tirr, multiplied by the total numbers for each condition, and adding up all the products. The final results for each selection strategy are shown in Fig. 3. With the maximum power strategy for damping selection, the average power over a year is higher than with a maximum energy strategy; in fact, the total recoverable energy is 38.5% higher when selecting damping with a maximum energy strategy. 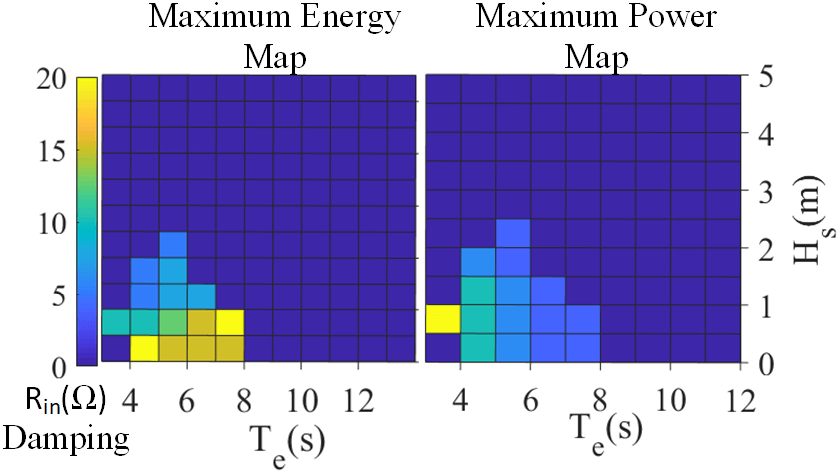