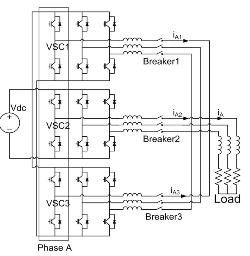 Fig. 1. Topology of the whole system.
The parallel operation of voltage source converters (VSC) can add modularity, redundancy, and flexibility for a gradual scaling up of power demand. In addition, by using PWM schemes such as interleaving, the size of passive components of paralleled converters may be reduced, resulting in an increased power density. The downside of paralleling VSCs - as opposed to using a single converter rated at the total power - is the higher number of components, which reduces reliability as the possibility of faults in the system increases. In consequence, only if the VSC under fault can be isolated from the system and replaced by a redundant VSC, can the reliability of the whole system be increased, which is the basis of above-mentioned benefits of paralleling converters. It is very important to detect and isolate internal fault from parallel VSCs system.

The study on internal fault detection and isolation for paralleled voltage source converters is carried out in CPES in 2008. The example system used for analysis is comprised of three two-level VSCs, a common dc bus, and an R - L load (shown in Fig.1). Two of the converters work together while the third one is a redundant unit, creating a 2 1 system (N 1 redundancy with N=2). Since the possibility of two devices having independent faults at the same time is very low, only single device faults are considered including switch/diode short and open circuits.

In this study, the potential damages of such faults relating to circulating current were analyzed. Based on the analysis, two kinds of internal faults detection and isolation schemes are proposed, which rely on de-saturation and circulating currents separately. The study confirmed that if the system can be shut down for a short period, SCRs can be used to recovery the system from internal faults with one redundant VSC. Otherwise, the topology with isolated DC buses for each VSC or other fast DC current breakers should be used. Experimental results using a 2 1 VSCs system validated the analysis and protection schemes. The recovery procedure for internal open fault and short are shown in Fig.2 and Fig.3. 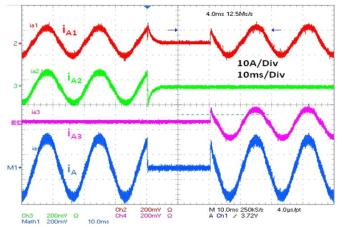 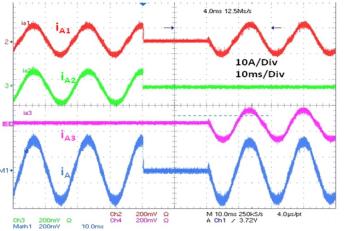