The trend in intermediate bus architectures is increasing output power demands and higher operating frequencies. Improved topologies and semiconductors can allow for lower loss at higher frequencies. A major barrier to further improvement is the transformer design. With high current levels and high frequency effects the transformers can become the major loss component in the circuit. Leakage inductance of the transformer can also greatly degrade the performance by causing severe ringing and high body diode loss. Matrix transformers offer the ability to reduce winding loss and leakage inductance. At higher frequencies the AC resistance of the winding dominates. The matrix transformer offers the ability to split the high secondary current resulting in lower winding losses. The ability of the matrix transformer to reduce leakage inductance comes from the reduction of turns in each transformers primary. The leakage and secondary loop inductance are reflected by a squared factor, so by reducing the turns the leakage inductance can be reduced significantly. The traditional matrix transformer divides the turns into two separate core structures doubling the size and core loss. The modifications proposed by CPES are to first combine the two cores into a single core and then to arrange the windings so that the AC flux will cancel in the center leg reducing the core loss by around 40% and reducing the size of the center leg. 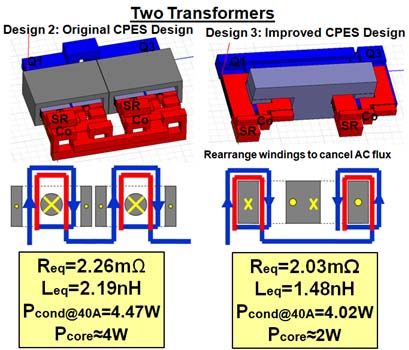 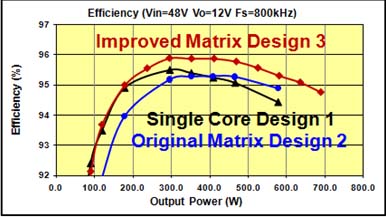