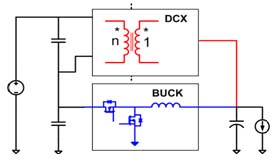 Fig. 1. Circuit Topology of Sigma VR.
Sigma voltage regulator is attractive from not only the higher efficiency performance by its special circuit topology but also its less output capacitor configuration by its faster DCX current response as shown in Fig 1. As a critical part of Sigma VR, DCX determines almost the overall performance, especially when DCX handle most of the Sigma power. As a determined component of DCX, the transformer impacts the efficiency (Rout) and transient performance of DCX (Lout). Smaller Rout and Lout are preferred for smaller loss and faster transient dynamic response.

By this new structure, the winding resistance of the transformer could be reduced to half of the original design, and the efficiency can be improved. Not only will this structure reduce the winding resistance, but also the leakage inductance of the transformer will be which is reduced by around 50%. Further improvement of this concept can be applied by dividing the primary winding into three 2:1 in-series windings, three set of secondary winding are paralleled. This further reduces the winding resistance as well as the leakage inductance. The efficiency improvement and less output capacitors can be achieved by the smaller Rout and Lout as shown in Fig 3. 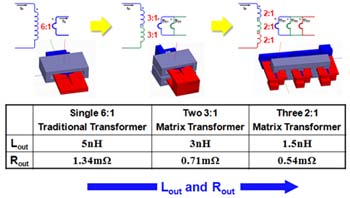