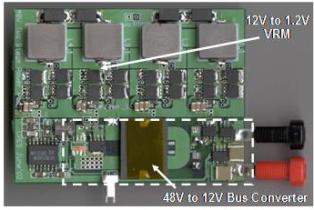 Following the 1997 CPES proposal for the multi-phase VRM approach, the infrastructure to support a multi-phase point-of-load converter has been established, gaining the full support and endorsement of the computer, integrated circuit, semiconductor, as well as power supply industries. Not only has the technology been adopted to power every computer, it has also been adopted in many other point-of-load applications, such as the DC/DC converters for telecommunications, network products, and various forms of distributed power systems (DPS). In the DPS architecture, CPES has proposed to replace the highly custom-designed DC/DC isolated converter with a novel two-stage approach, namely a "bus converter", serving as a "DC/DC transformer" used in the first stage to convert, say 48V, into an intermediate voltage, say 12V, while the multiphase buck converter is adopted as a non-isolated point-of-load voltage regulator that converts 12V input to 1.2V output, or any other form of voltage required. By leveraging the infrastructure established for the multi-phase voltage regulator for microprocessor applications, this proposed change has resulted in 15-25% cost savings for the next generation of telecom and networking products, with a market size even greater than that of the VRM.
Return to CPES Showcase