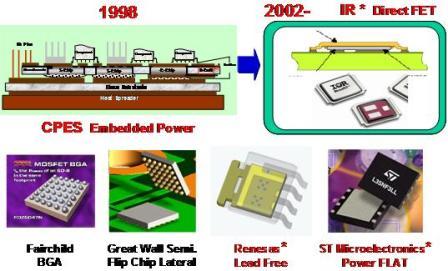 CPES has been promoting the idea of replacing the conventional wirebond with direct bonding, and has introduced a number of techniques, such as the flip-chip-on-flex and the "embedded power" technology. These integration approaches feature much-reduced interconnect parasitics, which enhance circuit performance; improved thermal management by introducing the opportunity for double-sided cooling; and improved functional integration by integrating snubber capacitors, bus capacitors, chip inductors, and incorporating embedded current sensors into the multi-chip, multi-layer packaged module.

In Year 2002, International Rectifier started introducing a packaging technique referred to as DIRECTFET. This is the first commercial product with packaging that no longer used wire bond for interconnect for power semiconductor devices. This product was claimed with significant reduction in interconnect resistance and parasitic inductance and much improved thermal management. Shortly after that, a number of companies followed and introduced similar products, such as Fairchild, Great Wall Semiconductor, Renesas, and STMicroelectronics introduced packaging that did away with wire bond for interconnect.
Return to CPES Showcase