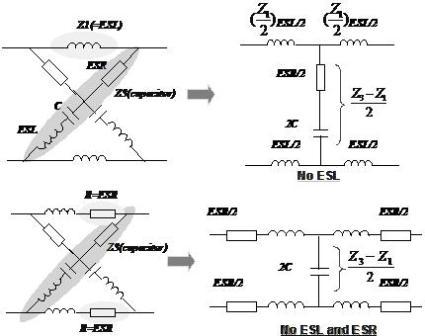 It is well known that the equivalent series inductance (ESL) of capacitors is detrimental to their high frequency (HF) performance. Minimizing ESL so as to greatly improve capacitor's HF filtering performance is very important for noise suppression and current ripple reduction in power electronics applications. In order to reduce the effects of ESL, two or more capacitors are usually paralleled, however, the performance improvement is still limited and there are internal resonances within capacitors. An ESL cancellation technique is proposed in CPES based on network theory. Instead of using two capacitors directly in parallel, two small trace loops whose inductance is equal to ESL are inserted between two capacitors. Two capacitors are diagonally connected. The resultant circuit is a T type filter without the effects ESL. The experimental results show the capacitor's HF filtering performance is improved by 26dB. It is a reduction of ESL by 20 times! The prototype is used in the practical circuits. It greatly reduces the EMI and HF current ripples. 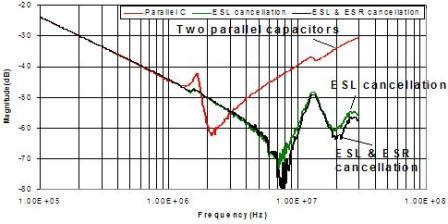