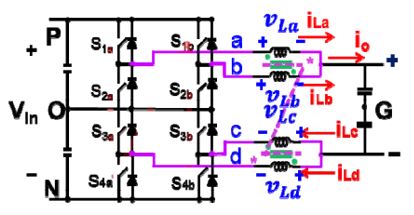 A prototype of integrated coupled inductors has been assembled and tested with three-level dc-dc converter hardware, as shown in Fig. 2. Within one switching cycle, the phase-leg output voltage is a three-level waveform, and the inductor current has a zig-zag shape due to the nonlinear inductance, as expected.
Return to CPES Showcase