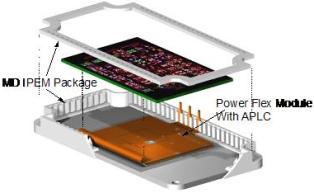 A new circuit topology has been invented that significantly improves the reliability and performance of dc-to-ac power converters (i.e., inverters) by eliminating shoot-through failures, one of the most dangerous failure modes encountered in conventional inverter circuits. Shoot-through failures occur when two series semiconductor switches are inadvertently turned on simultaneously, causing extremely high currents to flow that destroy the devices. The new augmented phase-leg configuration (APLC) is inherently immune to these shoot-through faults, making it unnecessary to add the special protection features that are required in conventional inverter circuits to prevent such failures from occurring.

The most widely used approach to preventing shoot-through failures in conventional inverters is to add discrete intervals of "dead time" into the switch control algorithms. Unfortunately, such dead time introduces distortion in the delivered output ac waveforms. The new APLC eliminates the need for control dead time. Inverter performance is enhanced in the process, making it easier to use the inverter in applications that demand high-quality ac output waveforms. A U.S. patent application has been filed, and discussions are now under way with CPES industry sponsors who are interested in considering the APLC for their inverter applications. At least one power semiconductor manufacturer is also expressing interest in incorporating the APLC topology into new power module designs.
Return to CPES Showcase