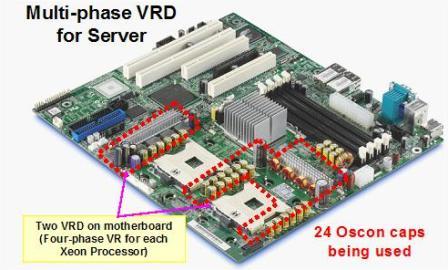 Intel microprocessors operate at very low voltage and high current, and with ever-increasing speed. It requires a fast dynamic response to switch the microprocessor from sleep to power mode and vice versa. This operating mode is necessary to conserve energy, as well as to extend the battery operation time. The challenge of the voltage regulator module (VRM) is to provide tightly regulated output voltage with a fast dynamic response in order to transfer energy to the microprocessor as quickly as possible. The first generation of VRM, developed for the Pentium II processor, was too slow to respond to the power demand of the new generation of microprocessors, which included the Pentium III and Pentium 4. As a result, a large number of capacitors had to be placed adjacent to the microprocessor in order to provide the required fast power transfer. This solution became costly and bulky.

Responding to Intel's microprocessor challenges, the CPES team developed a multi-phase VRM module based on paralleling multiple buck converter cells. This new multi-phase VRM has now been adopted by the entire industry as standard practice. A large number of companies have come up with integrated power semiconductor devices and controls (ICs) to support the multiphase concept. Companies such as Fairchild, Siliconix, Texas Instruments, National Semiconductor, Semtech, Intersil, ON Semiconductor, Linear Technology, Maxim, Primarion, Silicon Labs, Analog Devices, Volterra, Microsemi and STMicroelectronics, have produced integrated control ICs for the multiphase solutions. These products are used to power the current and future generation of microprocessors. Other power electronics industry leaders, such as International Rectifier, Renesas, Philips, PowerOne, OnSemi, and Intersil, also introduced the integrated module in their product lines, referred to as "DR.MOS", which exactly follows the IPEM concept developed at CPES. Companies such as Enpirion and Linear Technology recently introduced a new product that represents an even more integrated solution. It not only integrates power devices, drivers, and controls monolithically in the silicon chip, but also integrates an inductor on the backside of the silicon chip. Today, every computer containing the Intel microprocessors uses the multiphase VRM approach developed at CPES.

The CPES proposal for the multi-phase VRM approach has evolved into a multi-billion-dollar industry. Numerous power electronics companies have profited from the CPES IPEM vision and integrated approach. This particular technology has enabled U.S. industry to maintain its leadership role in both technology and market positions. It has enabled new job creation and job retention in the U.S. Without this technology infusion from CPES, the U.S. power electronics industry would have lost its market position to overseas low-cost providers in providing the power management solutions to the new generation of microprocessors.
Return to CPES Showcase