In recent years, a few literatures have focused on the impact of large-scale inverter-based photovoltaic (PV) generations to overcurrent relays, yet restricted to fault responses under the PV inverter grid following control. This paper has focused on the fault analysis of a 56-bus distribution feeder interfacing with a utility-scale PV farm, with the inverter control strategy in compliance with the IEEE Standard 1547-2018. The feeder testbed shown in Fig. 1 was implemented in PLECS. The fault responses under both the inverters grid-following and grid-forming control were discussed. The system fault current profile were analyzed under various scenarios, including both three-phase and single-phase faults, under different fault severity and at different locations.

Under grid following control, the PV inverter outer loops lost their effect, the current loop saturated and thus had a rather limited contribution on the system fault current. During a PV upstream fault, the PV farm current contribution caused an increase of the fault downstream current instead of decrease, the fault downstream overcurrent relays were likely to trip mistakenly, as illustrated in Fig. 2. Under grid forming control, the failure of inverter drooping mechanism leaded to current saturation under balanced faults and severe current signals distortion under unbalanced faults.

In summary, this paper assessed impacts of the utility-scale PV farms interconnection to the system fault characteristics, as well as stated potential issues in overcurrent relay under high PV penetration. The fault current profile changes can lead to relay desensitization and false tripping, which will require the revising of relay settings. 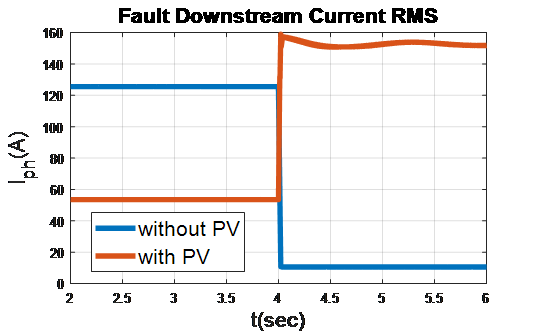