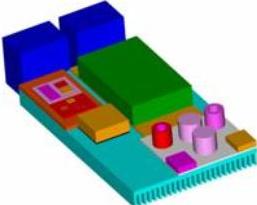 The development of reduced-order modeling strategies for accurate multi-dimensional thermal analysis is a pressing need in the design of integrated power electronics systems.

At the Department of Electrical and Computer Engineering, North Carolina A&T State University, Prof. Marwan Bikdash and his colleagues have developed a methodology to obtain detailed RC equivalent circuits from finite element (FE) simulations of transient and steady-state thermal behavior using system identification and model reduction of linear systems. To facilitate the process, they have also developed software to generate the topology of the equivalent circuit automatically from the FE simulation data. This approach will provide powerful analysis tools to aid in the design of these complex systems.

The developed algorithm and software were applied to a three-dimensional model of an electronic chip installed on a printed circuit and cooled by air flowing at the top. The chip has 16 pins, each of which are considered a different domain. There are an additional three solid domains - the board, silicon chip, and the plastic package. The chip was first modeled on the Multiphysics™ FEMLAB finite-element model, and the resulting model is indeed very large (e.g. 34,585 tetrahedral elements).

The developed software was asked to decompose the chip geometry with about 70 nodes per region. The partitioning algorithm returned 131 regions where some of the regions were simply a single pin (domain). Subsequently the topology of a 131-node equivalent circuit was developed where conductances were assumed only between adjacent regions. The black dots shown in the middle figure indicate some of the centers chosen. 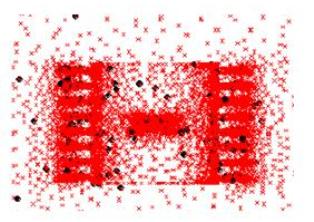 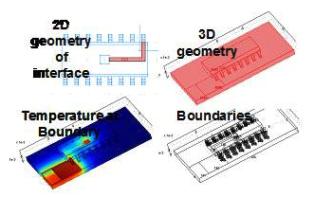