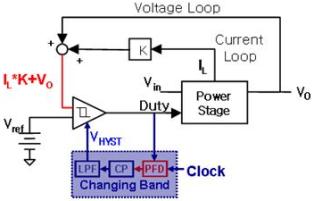 CPES proposed novel hysteretic control method scheme and Fig.1 shows the operating principle. An additional loop is added to adjust the hysteretic band. The hysteretic band width is modified to synchronize the duty turn-on signal and the reference clock. By slowly adjusting the hysteretic band through a phase lock loop (PLL) with a fixed frequency and interleaved clock reference for each phase, constant frequency and interleaving can be realized in the steady state. On the other hand, slow band changing will make this controller perform as conventional hysteretic control during the transient for fast dynamic response. After the transient, each phase will be pulled back to interleaving status through its band adjustment. 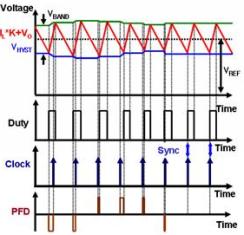