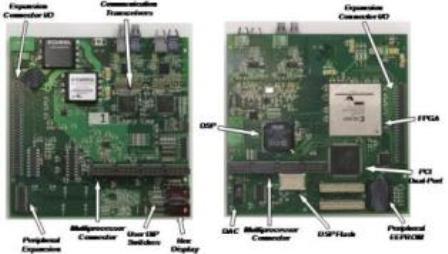 Sponsored by the Office of Naval Research (ONR), under the Advanced Electrical Power Systems (AEPS), CPES developed a digital application controller under the name of Universal Controller (UC). The UC was developed as the digital-controls-equivalent of the PEBB (Power Electronics Building Block) concept, in an effort to standardize all control platforms in future generation NAVY more electric ships. The main feature of the UC was its hybrid DSP-FPGA digital architecture, allowing for fast and expeditious implementation of application-level controls in the DSP, while having all main power electronics specific functions implemented in the FPGA (control of A/D and D/A converters, communication, PWM etc.) This split hierarchical control approach was ONR's and CPES' shared vision, to greatly simplify the design and control of power electronics enabling now system engineers to use it without requiring any expertise, but by simply using all power electronics functions embedded within the PEBB-based converter controls. CPES demonstrated this concept by developing a distributed control architecture for modular power electronics systems, featuring completely decoupled control functions; system-level in the DSP-based application controller and FPGA-based PEBB systems. The advantages of UC-like control architectures are significant, and have already been incorporated in the most wide field of applications beyond marine systems, expanding from home appliances to advanced motion control systems. The impact of the UC digital architecture and its very concept has been high, and at this point might be considered a mature technology, which is avidly being incorporated by the industry not just for power electronics systems but for the control of all electrically controlled equipment pursuing UC automation systems.
Return to CPES Showcase