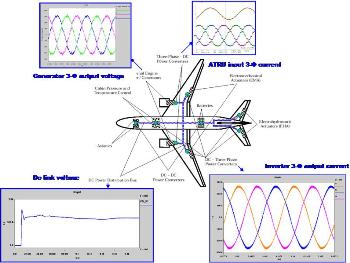 Distributed power electronics conversion systems have been used in a variety of applications, such as aerospace, space stations, telecommunications, and computer systems, therefore modeling them is an important task. However, modeling these systems is a complex issue since they combine numerous and different types of power converters, which when interconnected can easily interact with each other if no precautionary measures are taken. Therefore, it is important to study the operation of the system carefully as part of its design process.

As a demonstration testbed, CPES studied a simplified version of these electrical distribution systems of comprising an ac source that is a synchronous generator feeding multiple ac and dc loads. The generator voltage regulator is referred to as point of regulation where it controls the voltage at the ac bus. Several branches are connected to that bus, feeding different loads. The main loads are PWM inverters and motor drives. The study went through the actual model implementation of the several components considered, switching, switching functions and average models are used throughout the system. Analog and digital control systems are also taken into consideration, and protection systems, as well as linear and nonlinear magnetic components for transformers and electrical machines. The system was then simulated using the circuit simulator Synopsys Saber where some results are shown in the figure below.

Modeling and simulation of these systems has many advantages such as, analyzing the operation of the system and the interactions between different subsystems, reducing the cost through avoiding redesigns, applying different studies as stability which was done here by means of Lyapunov's indirect method - local assessment of large signal stability, faults, power quality, and parametric analysis. Numerical simulation issues were also discussed in the study.
Return to CPES Showcase