Fig. 1. PHEV with Ni-MH Batteries and System Level, Functional Diagram.
Adding addition energy storage to Hybrid Electric Vehicles (HEVs) is a popular trend to increase efficiency and improve MPG. This same energy storage element can also be utilized for grid applications for over 90% of the day while the car is not being driven. By converting a HEV into a Plug-in HEV (PHEV), while allowing for Smart-Grid control and bi-directional power flow features, the battery can supply an array of ancillary service capabilities to the utility grid (such as: peak-shaving/valley-filling, VAr compensation, active power filtering, etc.). This effectively takes full advantage of these mobile energy storage elements to maximize their use within the grid system and with larger amounts of renewable energy sources (solar and wind energy) integrated into the grid, with their variable energy output, these storage elements can help maintain proper stability by errors in the network energy balance equations.

Seen in Fig. 1 is a PHEV conversion, by VPT Energy Systems, and the associated diagram for electrical and control integration into the CPES Sustainable Building Initiative (SBI) that utilizes the PHEV energy storage in conjunction with renewable energy sources connected to the grid to generate a Zero Net Energy Transfer over a yearly average.

The Bi-directional Power Converter (BPC) in the PHEV allows for storage and transfer of the renewable energy to the loads; as seen in Fig. 2, the BPC can seamlessly transfer it's mode of operation from charging to discharging and back. This helps alleviate stress on the grid by providing a subtle transition in power flow and can be used to reduce load peak demand upon the grid. In Fig. 3, the BPC is controlled to adjust its output PF angle to provide VAr compensation to the grid. As such, local VAr generation to compensate the grid to unity PF can be achieved in such a setup.

These features, and others, are implemented in the CPES SBI testbed. Through the system controller, power level and PF requests can be made of the BPC and the converter will respond within nominal limitations.

Fig. 2. Unity PF Charging to Discharge back to Charging. 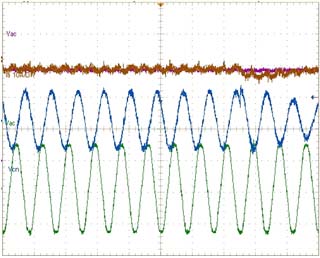