A generalized terminal modeling approach was developed earlier at CPES for predicting electromagnetic interference (EMI) from a boost converter. The results of conducted emissions (CE) were found to match well with the measurements up to 100 MHz. This technique is extended here to model a buck converter. Measured and predicted results of CE matched well within about 6 dB at most frequencies up to 100 MHz.

Modeling is a preferred way of evaluating the performance of any system at the early stages of the design cycle. EMI modeling usually involves characterization of EMI sources and the essential coupling paths. These models can be physics based models or behavioral models. System level simulations with physics based models are often very complex. At EMI frequencies, simulation of physics based models may require significant computational resources and yet may not converge or may lead to unusable results. Behavioral modeling can overcomes these limitations and has proven to be quite promising in recent years. Behavioral EMI models need to be simple yet accurate even at higher frequencies.

A buck converter operating as an open-loop control dc-dc converter with 100V dc input, and 70V dc output across a 50ω load was modeled using generalized terminal approach. The switching frequency (fS) is 100 kHz. In simulations this converter was then replaced with its 3-terminal (behavioral) model as shown below.

The results of CE at the positive and negative terminals of a 50ω LISN were compared with measurements and good agreement was obtained up to 100 MHz. The results for predicted noise voltage spectrum at positive terminal of LISN is shown on the left.

Effects of the LISN impedance and the input capacitor (CIN) on accuracy of the model were also studied and problems with a popular model extraction technique, the series-and-shunt insertion method, were demonstrated. Finally, guidelines are given to avoid these problems.

The results obtained in general indicate the potential use of this modeling technique for predicting EMI from power converters that have a buck like input stage. The validity of this technique for modeling boost converters has already been demonstrated earlier. This makes the generalized terminal modeling applicable to a wide variety of dc-dc power converters. 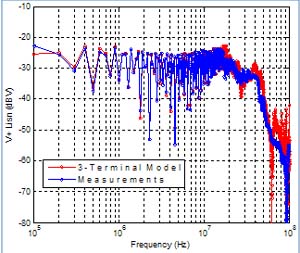