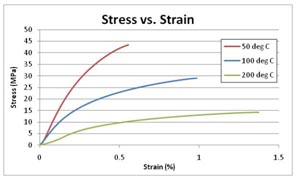 The simple tension experiments and creep experiments were carried out for the sintered sample films using the equipment Dynamic Mechanical Analysis (DMA Q800, TA Instruments). Simple tension tests and constant stress creep tests were performed in air at temperatures between 25°C and 250°C.

From the data of creep tests as shown in Table 2, it is found that the creep behavior of sintered nanoscale silver paste is similar to that of conventional solders. Under a constant tensile stress, the steady-state strain rate and rupture strain generally increase with temperature, while the rupture time decreases when temperature increasing. The activation energy of creep for the sintered nanoscale silver pastes is also estimated as 70KJ/mol, which is higher than solders (about 40-50KJ/mol). The creep testing result indicates that the sintered silver paste has higher creep resistance than conventional solders. 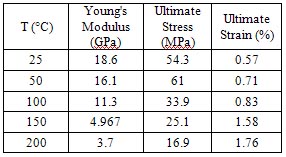