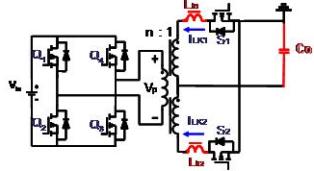 In a distributed power system (DPS) architecture, the single-stage isolated converter (48V to low-voltage output) is replaced by the two-stage approach. A "bus converter" is used for the first stage to convert 48 V into an intermediate voltage, and the multiphase buck converter was adopted as the post-regulation stage.

As the Intermediate Bus Architecture (IBA) is prevalent in the server, telecom, and network applications, the intermediate bus converter (IBC) has become one of the hottest products. CPES has developed several high-density IBC topologies (VTIP 03.115). The advantages of this new invention can be summarized as follows: (1) This topology no longer requires the need for energy storage inductor like most of the commercially available bus converter configuration. (2) With switch semiconductor device in both the primary side and secondary side operating at dual voltage and near zero-current switching condition, there are minimum switching losses associated with the switch devices. In addition, there is almost no body diode loss in the similar synchronous rectification on the output stage. Our prototype hardware has demonstrated 500W output power in a quarter brick size. Compared with industry practice, its power density is a factor of 2 to 3 higher.
Return to CPES Showcase