As shown in Fig. 3, the proposed model consists of two feedback systems. In addition to the typical negative feedback system, the frequency positive-feedback mechanism in the converter system is proposed and quantified in the model. The nonlinear behavior of the PLL under weak grid conditions can be accurately predicted, and the large-signal frequency stability region can be also estimated by the proposed model. It shows that large penetration of distributed generation (DG) units, a large reactive power variation, and a weak grid tend to destabilize the converter frequency operation. The proposed model can help study electric power system or microgrid operation under a large penetration of renewable energy resources with power electronic interfaces. 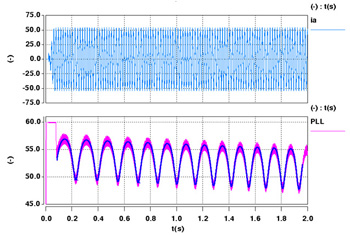