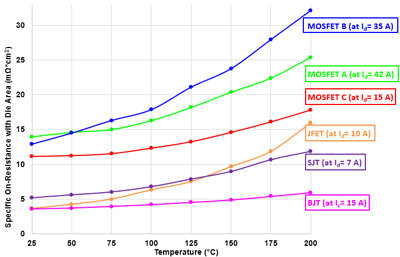 Fig. 1. Specific on-resistance vs. temperature.
The growing popularity of HEVs and MEAs heightens the need for high-temperature converters with high power densities. Wide-bandgap semiconductors such as Silicon Carbide (SiC) make such converters feasible due to their high thermal conductivity and high breakdown field. In previous work, SiC devices were shown to have better performance than those of conventional Si semiconductors in high-power applications. Namely, SiC devices have proven to experience lower on-resistances and faster switching speeds. Further, SiC devices have high-temperature reliability, which Si lacks. This improved performance has led to the commercialization of various SiC power semiconductor devices.

For the static performance comparison, the specific on-resistance of each device will be analyzed. The on-resistance of each semiconductor will be measured up to 200°C, and then specific on-resistance will be calculated using die area (Fig. 1). This is done to allow for valuable comparison among the various devices since resistance and size are indirectly related. The means of comparison for the dynamic performance of each device is switching energy loss density. A double-pulse test (DPT) will be performed on each device up to 200°C, from which the switching loss will be computed. Dividing this computed loss by the die area yields the switching energy loss density. Fig. 2 shows the high-temperature DPT setup used for measuring switching loss. 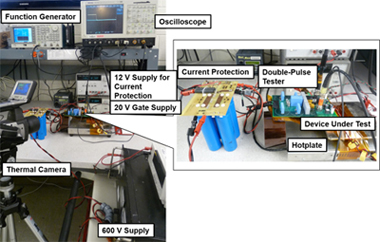