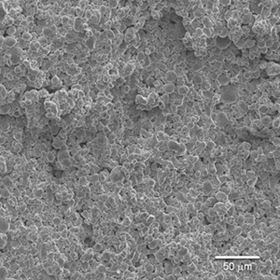 Fig. 1. Microstructure of pressed Permalloy powder coated with polymer insulation.
Magnetic materials used for high frequency applications are usually composed of ceramic ferrite types such as the NiZn ferrites. They usually have high permeabilities and high electrical resistivities as well as low loss making them suitable at high frequencies. However, these cores are usually fabricated with an air gap that results in field fringing that increases the winding loss. Magnetic powder cores on the other hand are usually made of metal or metallic alloys such as iron and Permalloy. They have lower permeabilities and have distributed air gaps due to the built-in gaps between particles. Since they are electrically conductive, their applications are limited to low frequencies because of an increase in eddy current loss at higher frequencies, which increases faster than the hysteresis loss. The goal of this research is to develop a process and material where the particles can be coated with an insulating layer to reduce the eddy current loss and extend the bandwidth and potential application to the megahertz range. A simple low-temperature solution-based process was developed to coat magnetic powder with an insulating polymer. Compacted cores made out of Permalloy-polymer composite (Fig. 1) showed a permeability that remained flat to at least 10 MHz and a resonance beyond 100 MHz. A comparison with the uncoated powder (Fig. 2) showed at least an order of magnitude improvement in frequency range. The permeability of the commercial MPP core begins to drop before 1 MHz. The core loss density of each material is shown in Fig. 3. For the uncoated Permalloy powder core, a core loss density of 300 mW/cc. is reached at a flux density of less than 15 G at 5 MHz, while for the composite the same core loss density is reached at nearly 100 G. The core loss density of the composite at 1 MHz also matches that of the MPP core at only 500 kHz. Further development of the material may make it possible to replace bulkier cores in applications operating in the MHz range, such as the converter shown in Fig. 4 in order to reduce the volume and increase power density. 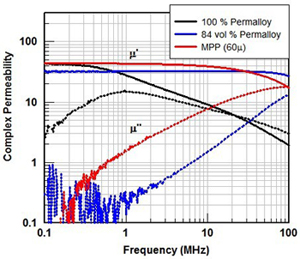 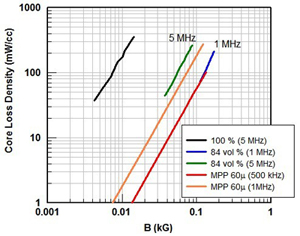 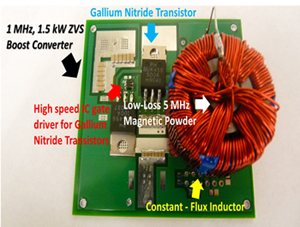