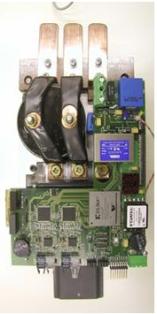 Fig. 1. 33 kW - FPGA PEBB.
CPES strongly supported from the mid 1990s the Power Electronics Building Block (PEBB) and later the Advanced Electrical Power Systems (AEPS) Office of Naval Research (ONR) programs, under which it developed numerous PEBB-based power electronics conversion systems demonstrating the advanced capabilities attainable by using a modular approach to high power electronics. Always focusing on marine applications for future NAVY more-electric ships, high power PEBB modules were developed at CPES ranging from tens to hundreds of kilowatts, exploring alternative PEBB topologies, soft and hard commutation techniques, control architectures, choice of semiconductor and passive devices, and most importantly the functional and temporal partitioning of PEBB modules. The latter work proved essential in determining the structure of PEBBs and what components should be functionally integrated into the modules, since at these higher power ratings monolithic integration was utterly unfeasible, and only a discrete approach could be used. The validity of the modular approach embodied by the PEBB concept -- sharing CPES' own system-level vision embodied by the IPEM -- has been proven by one of the leaders of the electric power industry, ABB, who also in close cooperation with ONR has extended PEBB modules into the multi megawatt range, employing them in the most diverse range of marine and industrial applications. Going forward, CPES is currently performing a study on the development of 1 MA switch, in what could become the first one million amp PEBB using SiC semiconductor devices. For this CPES is employing its own-developed embedded packaging technology, advancing the process into a fully three-dimensional approach to achieve the voltage and current ratings required. Regarding other applications, it is also expected that PEBB modules will become increasingly predominant as a technology for the development of future more-electric aircraft, where CPES has also actively participated in the development of high reliability three-phase PEBBs. 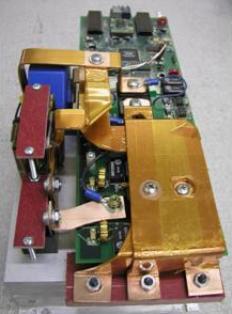