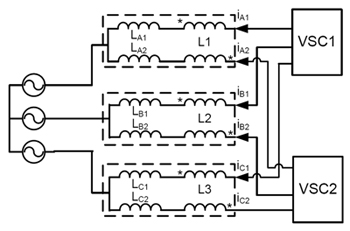 Fig. 1. Interleaved three phase rectifier.
Three-phase voltage source converters (VSCs) are very popular in AC medium and high power applications. Paralleled three-phase VSCs have the benefits of higher power, modularity, redundancy and, flexibility. Interleaving can reduce output harmonic currents in a paralleled VSCs system, which has the potential to increase power density; a desired effect for many applications such as vehicle and aircraft. This benefit is more significant for rectifier applications as shown in Fig.1, where the interphase inductor that is used to suppress the circulating current generated by interleaving can be integrated with the boost inductors which already exist in the system.

Due to the phase-shifting of the two converters in the interleaving topology, the total flux in the integrated input inductors will include the low frequency part that is related to the output current, and the high frequency part that is related to the circulating current, as shown in Fig. 2. Without proper control, those two parts will add together and the total flux will be larger than the non-interleaving case. However, with proper control of the circulating current, the high frequency flux can be controlled as in Fig.2b, then the total flux is minimized and the input inductor size can be smaller. 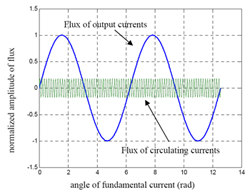 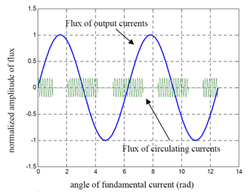 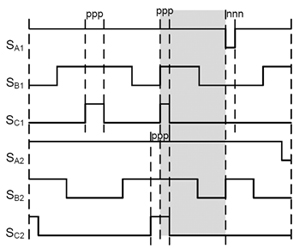