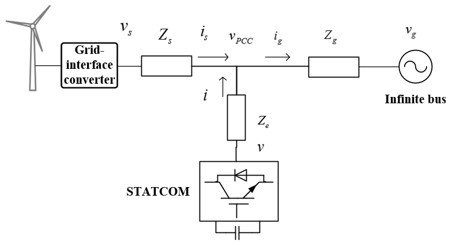 Fig. 1. Single-line diagram of the test bed.
Because renewable energy sources are environmentally friendly and inexhaustible, more and more renewable energy power plants have been integrated into power grids worldwide. To com-pensate for their inherent variability, STATCOMs are typically installed at the point of common coupling (PCC) to help their operation by regulating the PCC voltage. However under different contingencies, PCC voltage fluctuations in magnitude and frequency may impede the STATCOM from tracking the grid frequency correctly, hence worsening its overall compensation performance, and putting at risk the operation of the power plant. Furthermore, the virtual synchronous machine (VSM) concept has recently been introduced to control grid-connected inverters emulating the behavior of rotating synchronous machines in an effort to eliminate the shortcomings of conventional d-q frame phase-locked loops (PLL). The key advantage of VSM controllers over D-Q frame controllers is the way they synchronize; the VSM-type controller remains inherently in harmony with the electrical system, while the D-Q frame controller relies on the PLL to orient its control system and operation. The test bed is shown in Fig. 1.

When a step change of the wind turbine input power is applied, the wind turbine frequency ωs will increase or decrease at first, then come to a new steady state that is synchronized with the grid. During the transients, the STATCOM will synchronize with vPCC, which will also suffer a change in frequency before returning to the nominal 50 Hz, where the VSM-based STATCOM will be less sensitive to the frequency change due to the virtual inertia applied, and stay closer to the nominal frequency than the D-Q frame controlled STATCOM. This is shown in Fig. 2. Thanks to the better synchronization performance plus virtual impedance, the PCC voltage regulation is also better, as shown in Fig. 3. Furthermore, the synchronization can be improved via virtual inertia, and the virtual impedance contributes voltage regulation and robustness to system disturbances. 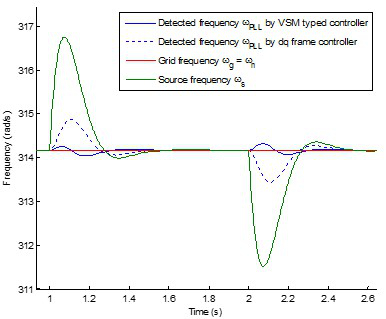 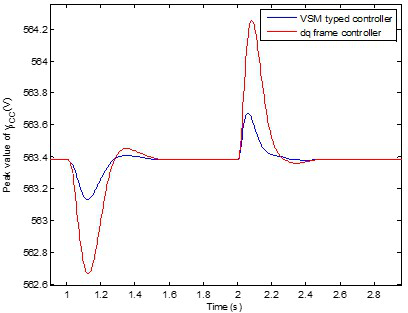