Fig. 1. Basic CLL resonant converter for LED Driving.
The CLL resonant converter is a variant of the LLC resonant converter, as shown in Fig. 1. The resonant tank of the CLL converter is composed of Cr, Lr1 and Le2. In normal operation, Cr will resonate with Lr1 and Le2. Its operation principles are very similar to the LLC's. However, for CLL, the magnetizing inductance of the transformer can be very large, because the magnetizing current of the transformer does not play an important role in achieving ZVS during dead time. In contrast, the current flowing through the external inductance Lr1 is very critical for achieving ZVS. For simplicity, the impact of a small magnetizing current can be ignored in practice, so iCr≈ iLr1 during dead time. Therefore, Lr1 could be designed properly to meet the ZVS requirement.

The CLL resonant converter is a good candidate for LED driving. Because its magnetizing inductance could be very large, excellent current-sharing capability can be achieved even under unbalanced loads. Furthermore, ZVS of the primary-side switches can be achieved by optimizing Lr1. In addition, the leakage inductance of the transformer can be absorbed as a part of Le2. Therefore, a two-stage LED driver is proposed, which consists of a buck converter as the first stage and a MC3 CLL resonant converter as the second stage, as Fig. 2 presents.

The control strategy for this two-stage LED driver is as follows. The forward current of one specific LED string is sensed for feedback control to tune the duty cycle of the buck converter. Therefore, Vbus, which is also the input voltage of MC3 CLL, is adjusted according to the output requirement. In addition, the MC3 CLL resonant converter is always working at the resonant fre-quency point, so the second stage is unregulated and it works like a DCX. Under this working condition, ZVS of the primary-side switches and the ZCS of the secondary-side rectifiers can be achieved. Therefore, the CLL can attain higher efficiency with a wide load variation. 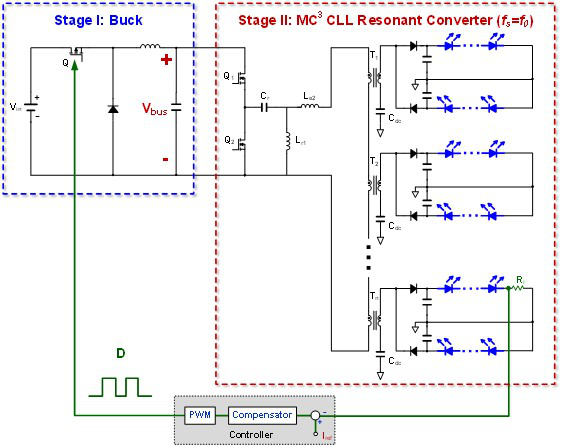