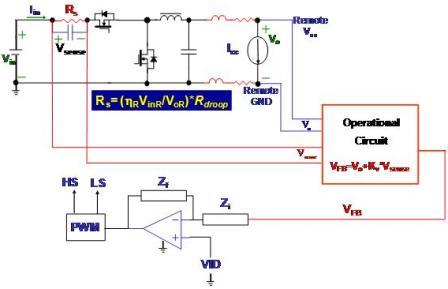 In order to achieve the AVP for CPU VR, we need to sense the load current. In the future, since the tolerance window and droop resistance will be much smaller, the sensed load current should be very accurate. Two lossless current sensing methods are widely used in commercial VRM products. These are MOSFET Rdson sensing and the inductor DCR sensing respectively. Both of these do not need an external sensing resistor, hence they are lossless sensing. However, since both the MOSFET Rdson and the inductor DCR have a large parameter tolerance of in most cases, the load line can not be very accurate by using these two methods.

The basic idea of the proposed input-side current sensing method is to sense the average input current to achieve AVP. In the figure, Rs is used to generate the desired droop voltage but reduce the power loss dramatically since the input current is much lower than output current in VR application. For a 12V input, 1.3V output VRM with 100A output current, assuming that Rdroop is 1mohm, the additional loss is less than 1W.