Fig. 1. Low-profile inverse coupled inductor substrate
The power density of the 3D integrated POL module can be improved by using two-phase inverse coupled inductors, as shown in Fig. 1. For this kind of coupled inductor, the steady-state inductance Lss is very nonlinear, which means the value of Lss increases greatly from heavy load to light load. The nonlinear Lss is beneficial for light-load efficiency improvement. However, the nonlinearity of transient inductance Ltr is more prominent than that of Lss, because the coupling becomes weaker at light load, as illustrated in Fig. 5. The huge Ltr at light load cause a severe under-shoot voltage spike during the load step-up transient. From the DC flux path shown in Fig. 2(a), it can be seen that the DC bias leakage flux path (i.e. the core between two windings) is sensitive to the load, as is the reluctance of the leakage flux path. This is the key reason that the coupling has a large variation when the load is changed. By adding an air slot into the leakage flux path, its reluctance becomes insensitive to the load, and the coupling can be maintained. The non-linearity of Lss and Ltr also can be freely controlled by using a differently shaped slot. The middle slot exhibits moderate nonlinearity, while the full slot structure has almost linear inductance. The large voltage spike during the transient has been solved due to the significant reduction of the light-load Ltr value.

Fig. 2. (a) Top view of the half-core for different coupled inductor structures 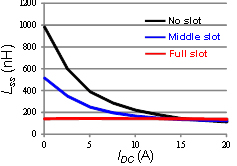 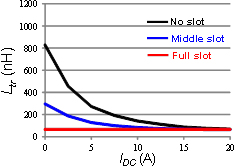 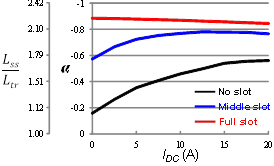