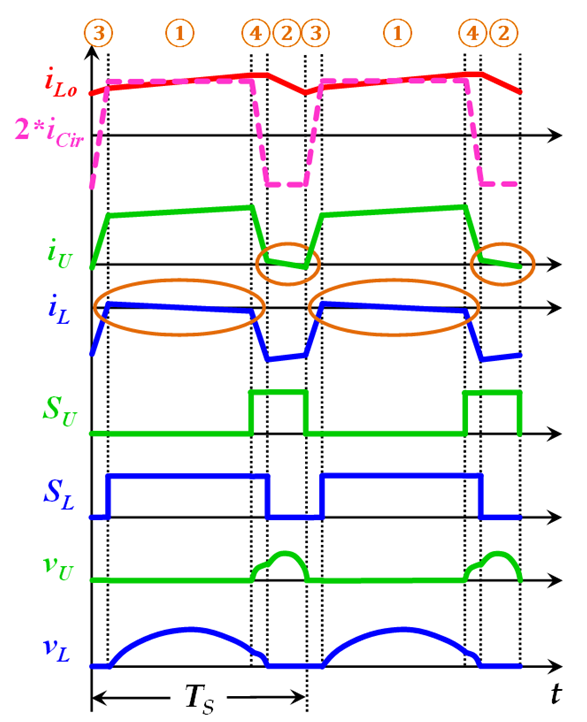 Fig. 1. Principle of the SCCVC for MMDC
Modular Multilevel Converters (MMC) have been increasingly considered for medium voltage and high voltage applications due to their favorable high modularity and scalability features. It is worth noting that the cell capacitor voltage ripple of the MMC is inversely proportional to the fundamental frequency, and proportional to the line current, which becomes an issue that prevents the MMC from being applied in low fundamental frequency and high load conditions. Injecting different types of circulating current and common mode voltages are approaches that have been proposed and compared. When it comes to MMC operations at very low fundamental frequencies (0.5~5 Hz), people begin looking into the possibility of DC current generation with MMC or MMC-like topologies. It has been shown that DC current can be delivered at the lines with the injection of a low frequency square-wave circulating current. Similar approaches have shown that the injection of a low frequency circulating current can enable the MMC power arms to operate in DC/DC conversions. Recently, a control method called Switching-Cycle Capacitor Voltage Control (SCCVC) was proposed for the MMC to balance the cell capacitor voltage in every switching cycle. Since the SCCVC can effectively decouple the capacitor voltage ripple from the fundamental frequency, the SCCVC can work for any fundamental frequency, including DC operations. This paper discusses the application of SCCVC in DC/DC power conversions.

Another concept - wherein a number of identical power cells are stacked in series to construct a power converter, motivated by the MMC - is also quite promising in HV and MV applications, since the voltage rating of devices in each power cell will cause a bottleneck. A comparison between the MMC topology and the conventional two-level three-phase converter raises the idea that the power arm can be regarded as equivalent to a single switch. As long as a loop composed of two power arms and a large capacitor exists, the SCCVC is able to control any low frequency or DC current delivered through a third branch that is connected to the two power arms at the same node. At the same time, all the cell capacitor voltages are balanced in one switching cycle. Leveraging the SCCVC, theoretically speaking, all the DC/DC topologies can be modified to a Modular Multilevel DC/DC Converter (MMDC), in order to extend the applications from low voltage domains to high voltage domains. This paper begins by illustrating the SCCVC for the MMDCs using the example of a Modular Multilevel Buck Converter (MMBC), and showing its fundamentals, benefits and limitations, and behaviors for a vast range of application domains.