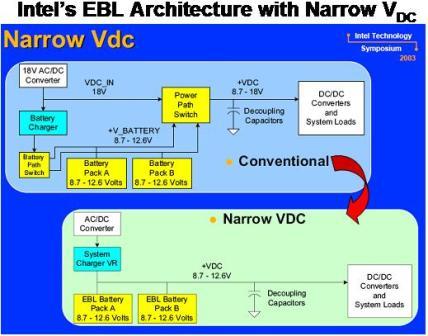 The current laptop CPU VR solution is the single-stage multi-phase buck converter. It works with a wide variation of input voltage (8.7~19V). To maximize the conversion efficiency in order to extend the battery life, the VR is typically operated at 200~300 KHz. Only the low-profile capacitors with limited capacitance per unit can be used in the laptop application, a large amount of output capacitors are used, as a result of the low switching frequency of the VR. Future mobile CPUs will be much more powerful and will demand higher current. Following today's approach, many more capacitors will be needed, and it will be almost unrealistic to fit them into the limited laptop space. High switching frequency can reduce the size of the bulky capacitors. However, the single-stage buck VR suffers significant losses at higher frequency. CPES already demonstrated the higher efficiency at higher switching frequency using proposed two-stage solution for the laptop VR. The two-stage VRM solution converts a wide variation of input voltage to an intermediate voltage at approximately 5-7V, and then at the second stage converts the 5-7V to 1V. CPES has built a prototype that can operate the second stage at multi-MHz has been demonstrated, which is one order of magnitude higher than the current practice. This can reduce the use of the numerous capacitors by 75%. In fact, Intel recently adopted a power management structure called extended battery life (EBL) as an industry standard for future laptop computers. This structure is similar to what CPES proposed. The two-stage power management solution for laptops has now become a strong coalition force as Intel continues pushing the mobile computing technology forward.
Return to CPES Showcase