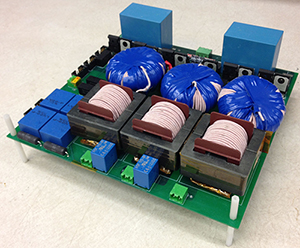 Fig. 1. (a) Converter prototype.
Three-phase rectifiers have been widely used in industries and increasing efficiency has always been a hot topic. Conventional 2-level 6-switch boost rectifiers are dominant due to their simplicity. However, in order to achieve a higher efficiency, 3-level converters are better options because lower switching voltage allows for the use of lower voltage switches, which usually presents lower on-resistance and smaller junction capacitors. Among the 3-level topologies, Vienna rectifiers are widely used to achieve high efficiency. With the use of a SiC diode, the reverse recovery loss from diodes in Vienna rectifiers can be totally eliminated, which further makes the Vienna rectifier a promising topology in achieving high efficiency. Additionally, unlike other bi-directional topologies, there is no need to worry about the shoot-through problem. Thus, in this paper, a Vienna rectifier is selected as the basic converter unit for the interleaved system.

In this paper, the design of a 3 kW, three-phase, two-channel interleaved Vienna rectifier with greater than 99% efficiency is presented. The converter efficiency is optimized for 230 V, 360~800 Hz input voltage, 650 V output voltage and 3 kW output power under a power quality requirement from a standard DO-160E. The operation principle of the interleaved Vienna rectifier is presented, with special attention given to circulating current generation and suppression. A comprehensive design procedure for the interleaved Vienna rectifier, including a design flow chart, loss estimation for the converter, design guideline of interphase inductors and semiconductor selection is described. A converter prototype is built and experiment results are shown, verifying the validity of the design procedure.