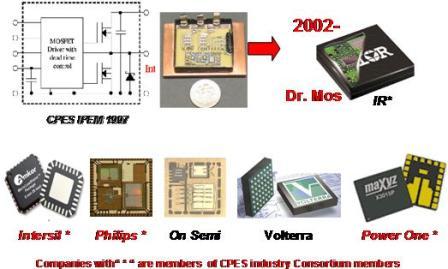 One of the major objectives of CPES is to develop and integrated power electronic module. The modular approach greatly enhances the power conversion in a wide range of applications. Shown in this picture is an IPEM prototype developed by CPES in 1997. Since the wide adoption of the multi-phase buck converter, there is a continuous effort toward providing a more integrated solution by Year 2002. International Rectifier started to introduce with so-called "Dr. MOS". The essence of Dr. MOS is what CPES refers to as IPEM -- almost literally the same as the functional integration that has been considered at CPES for the past five years. Shortly after that, quite a few companies started interviews of commercial products of so-called Dr MOS, in other words, IPEM. This included IR, Intersil, Philips, ONSemiconductor, Volterra, PowerOne, Renesas, etc.
Return to CPES Showcase