Improved Coupled Inductor Design for 6.6kW On Board Battery Charger

Fig. 1. Coupled inductor in PCB winding.
The coupled inductor has been widely adopted in VR applications for many years because of its benefits such as the ability to reduce current ripple or improve transient performance. In this paper, the positive coupled inductor concept is applied to an interleaved totem-pole CRM PFC converter for a 6.6kW on board battery charger. The difference between negative coupling and positive coupling will be discussed. The benefit of positive coupling for a battery charger will be presented, reducing switching frequency range and input DM noise. Hence the positive coupled inductor can improve the performance of the PFC converter. In addition, a balance technique is applied to help minimize CM noise. Furthermore, the inductor is integrated into the PCB winding. With the inductor integration, the converter can avoid labor intensive production and achieve a fully automatic manufacture. However, the PCB winding inductor has a larger parasitic capacitance and this parasitic capacitance will introduce spikes, ringing, and extra loss. In this paper, an improved PCB winding inductor design is provided to minimize parasitic capacitors and reduce loss. 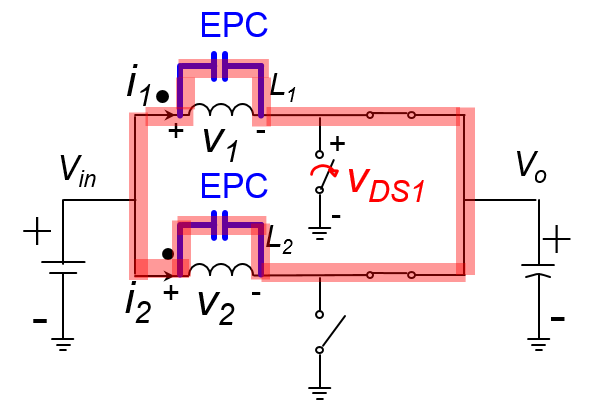