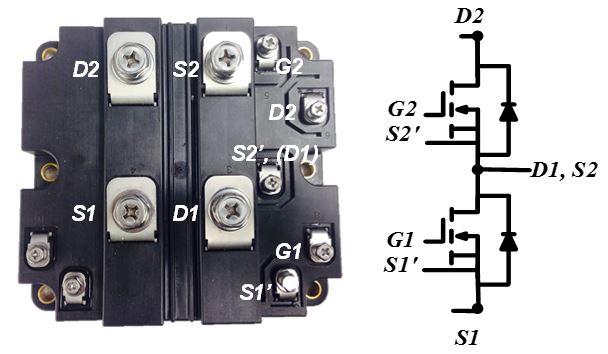 Fig. 1. 3.3 kV 400 A SiC MOSFET tested for evaluation of different topologies using SiC MOSFET. Static and dynamic performance characterization is done on the module, and results are used as input for topology evaluation.
Wide-bandgap semiconductors such as Silicon Carbide (SiC) appear to be game-changing devices in medium- and high-power applications where they enable operations at higher switching frequencies by switching faster, having lower conduction losses and maintaing higher junction temperatures. In addition to this, Si semiconductors, in comparison to SiC devices have a high thermal conductivity and a high breakdown field thus creating a better performance. The aforementioned advantages have led to the commercialization of several generations of low voltage SiC power semiconductor devices in past years. However, at medium voltage the SiC switches are not fully commercialized and are still under development by a number of companies around the world.

The main application areas of SiC MOSFETs that are expected to replace existing Si IGBTs are industrial motor drives, downhole drilling and grid-tied inverters. Due to higher operating temperatures that enable higher switching frequencies, the motor drives featured by SiC MOSFETs are expected to be more efficient and have a higher power density. In downhole drilling applications where cooling systems have restrictions, SiC MOSFETs can feature better performance because of higher maximum operating temperatures. Last but not least, with higher switching frequencies enabled by the SiC MOSFETs, the size of the passive filters can be significantly reduced and power quality can be increased on grid-tied converters such as PV inverters.

This paper tries to investigate the impact of emerging medium-voltage SiC MOSFETs on converters used for an industrial drive at medium-voltage and high-power. For this purpose, non-commercialized SiC MOSFETs are characterized, and three different topologies are designed for a motor drive using tested SiC MOSFETs and existing commercial Si IGBTs. The following topologies are designed for industrial drives at 4.16-, 6.9- and 13.8 kV voltage rating and 3- and 5 MVA power rating: the cascaded H-bridge (CHB) topology, which currently is the most popular topology for medium-voltage drives; the modular multilevel converter (MMC), which is the state-of-the-art topology in multilevel converters; and the five-level active neutral point clamped (5-L ANPC) topology, which is introduced by ABB and is being used in ACS2000 drives. By selecting different voltage and power ratings for converters, the purpose of this study is to find the effective trend of the SiC on motor drives versus voltage and power rating, and also to have a comparison between the different topologies themselves under different conditions.

The evaluation mainly tries to investigate the impact of the SiC technology on the efficiency and power density of industrial drives. For the converters designed at a given voltage and power rating, efficiency, power density (composed of size of capacitors, heat sinks, etc.), Joule per kVA (for installed capacitors) and total installed semiconductor die size (for a measure of semiconductor utilization) are compared to each other