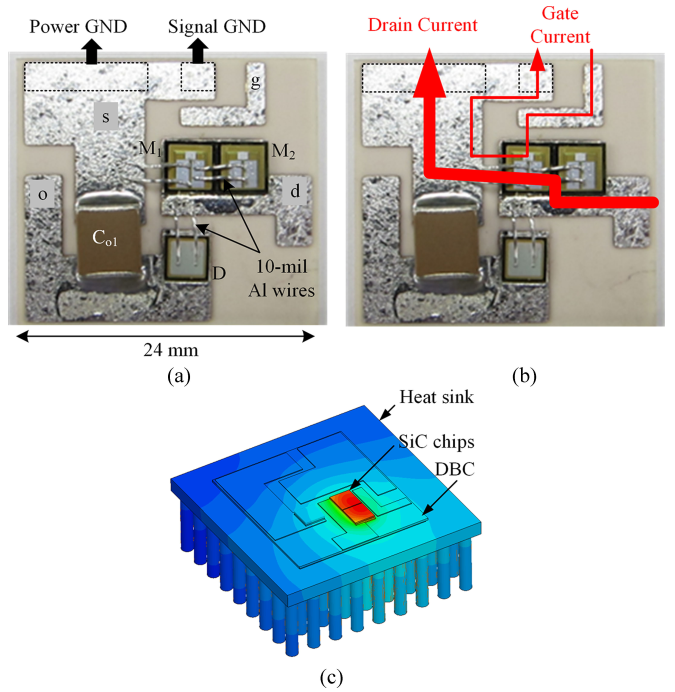 (a) Photograph of DBC module. The MOSFET's and diode are SiC (M1 and M2 : CPM2 - 1200 - 0080B from Cree, Inc., 1.2 kV - 31.6 A, 80 mΩ on resistance, die; D: CPW5 - 0650-Z050B, 650 V - 50 A, die). Source conductor has two different joints to motherboard PCB to reduce common-source inductance. (b) Separate drain and currents. (c) Thermal simulation result from ePhysics.
A switch module integrates semiconductor dies on a direct-bond-copper (DBC) substrate to achieve both noise robustness and low thermal resistance. Negative couplings between conductors as well as compact layout with 2.89-nH common-source inductance in the module eliminate self-turn-on from 420-A/μs di/dt. The low thermal resistance of the DBC substrate provides 2.35°C/W thermal resistance from junction to heat sink and limits the temperature rise of semiconductors switches to 50°C. The maximum rated power and system density of the DBC and PCB modules are provided for 400-V application. A 2-kW dc - dc boost converter switched between 400 kHz and 1 MHz achieved a power density of 220 W/in3 and an efficiency of 98.4% by employing the switch module.

Comparing a PCB module with a GaN MOSFET, the SiC DBC module in Fig. 1 shows a higher thermal conductivity. The thermal behavior of the DBC module was simulated by Ansys ePhysics to inspect the maximum junction temperature of semiconductor chips and junction-to-case thermal conductivity. Fig. 1 (c) shows that the junction temperature is 65.1°C and the heat sink temperature is 55.7C when each MOSFET die has a 3.75-W power loss. Junction-to-case and case to-heat sink thermal resistances are calculated as 0.89 and 1.46°C/W, respectively. The total thermal resistance from junction to heat sink is 2.35°C/W, 63% of the 3.71°C/W for PCB module.

The ZVS boost converter using a DBC module is shown in Fig. 2. Capacitors and a gate driver were placed on the top side of the motherboard. Area of 57 mm 61 mm or 3477 mm2 was utilized. A fan, power supply for gate driver, and the magnetic components were assembled to the bottom side of the motherboard fixing the height of the converter as 43 mm. The volumetric power density PD with 2-kW output power is calculated as PD = 2000 W/(3477mm2 43mm) = 220 W/in3. 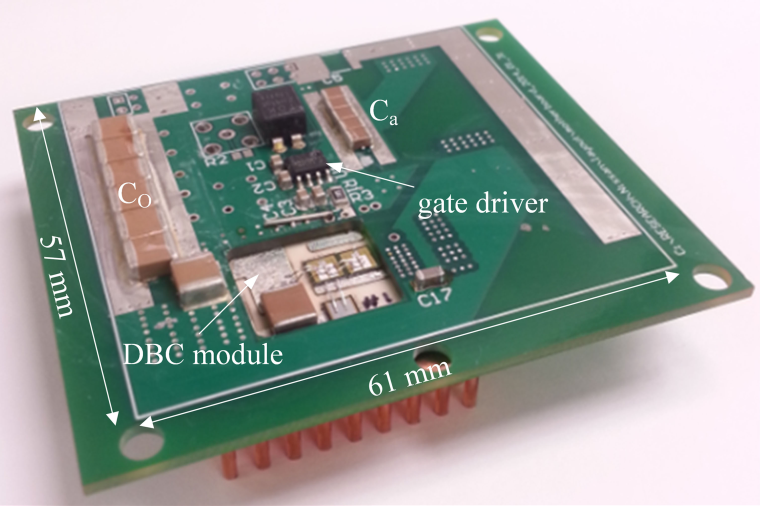