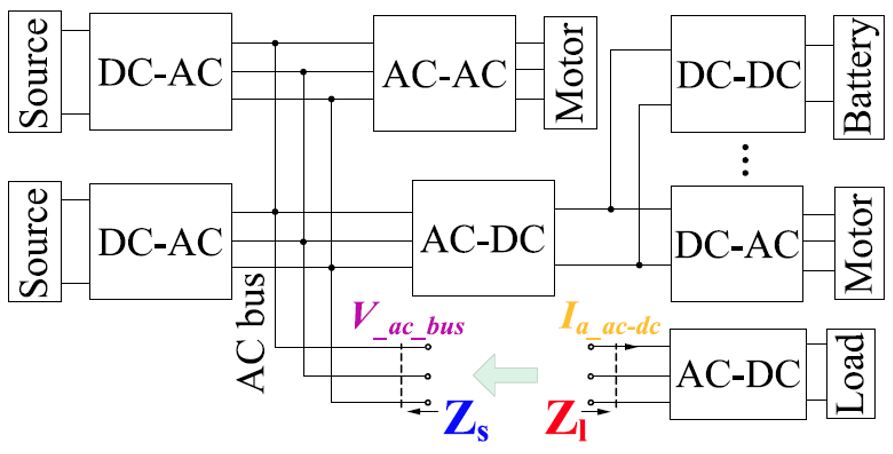 Fig. 1. Power electronics-based DPS.
The electrification process that aviation, maritime, and ground transportation applications have experienced over the past years is a direct result of energy conservation and sustainability. Other applications pursuing high-efficiency targets are data centers and microgrids. As a result, distributed power systems (DPSs) are widely used in the aforementioned applications. The common denominator among all these DPSs is the use of power electronics as the means to interface sources and loads as shown in Fig. 1. Typically, a DPS is not designed as a whole, but is instead defined in terms of several subsystems, each designed and manufactured individually by different suppliers. The subsystems are then integrated to form a complete DPS by the system integrator. One of the most important problems involved with system integration is possible instability due to subsystem interactions. Even though each subsystem may be designed properly for ideal source and load operations, the DPS can become unstable after the subsystems are integrated due to the interconnections of multiple regulated power converters. Several techniques, including eigenvalues analysis based on system state-space, loop-gain, and passivity, as well as an impedance-based method, have been proposed to study this system stability problem. The impedance-based analysis is the preferred approach due to its ease of practical implementation and inherent encryption, which allows vendors to share the terminal characteristics of their equipment ,aiding in the design and integration of DPSs.

This paper shows that under decoupled dq frame dynamics ? a characteristic of power electronics-based DPSs using active front-end converters ? , as well as voltage source inverters and grid-tied inverters to process power flow, the system impedances seen at ac interfaces feature a diagonally dominant structure in the dq frame. As a result, stability at these interfaces can be determined by the single-input and single-output impedance return ratios seen across the dq frame axes, namely,ZddSource, YddLoad, ZqqSource, YqqLoad, as the trajectory they describe in the complex plane matches the trajectory, or characteristic loci, of the eigenvalues of the return-ratio matrix L(s) , itself a product of the dq frame impedance and admittance matrices ZdqSource and YddLoad, which ultimately determine the stability at the boundary per generalized Nyquist criterion. The relevance of this result is threefold. First, it enables the direct use of impedances to assess stability in power electronics-based ac DPSs, thus recovering the physical insight of the original impedance-based analysis developed for dc systems. Second, it enables the use of straightforward impedance specification criteria to aid in the design and integration of these systems while discarding the conservativism of existing design criteria. Third, it identifies the prominence of the dynamic interactions resulting from the synchronization of power converters, formulating the proposed method in both dq frame axes. Experimental results with a laboratory scale power electronics-based distributed power system are used to validate the approach.